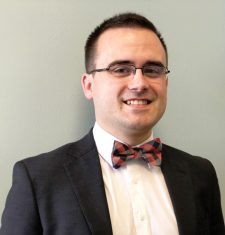 Josh Hall joined AACF as a Health Policy Fellow in April 2019. Josh has worked at the Arkansas Attorney General’s Office, Arkansas Department of Health, University of Arkansas for Medical Sciences, and as a law clerk at several law firms in Little Rock. In 2019, he will graduate with a Juris Doctor and Master of Public Health. While pursuing his concurrent master’s degree program, Josh has worked closely on many policy issues related to health care, including the opioid crisis, electronic cigarettes/vaping devices, medical marijuana, as well as health care access. Additionally, he served on the UA Little Rock Law Review and is a member of the Phi Alpha Delta Law Fraternity.

Josh is a graduate of Hendrix College, where he earned his BA in Politics, with a minor in Public Health. For a semester, he studied in Brussels, Belgium at the Institute for European Studies researching differences between the health care systems of the United States and European Union. Josh has served as a Stead Scholar and is a Benjamin A. Gilman International Scholarship recipient. Originally from Sheridan, Arkansas, Josh is an avid fan of every type of sport but is especially partial to college basketball and, of course, the Arkansas Razorbacks!