In The State of Preschool 2018 annual report, the National Institute for Early Education Research at Rutgers University found that Arkansas preschool state-funded enrollment increased, but funding hasn’t kept up with inflation. State-funded programs serve 32 percent of 4-year-olds and 19 percent of 3-year-olds in Arkansas, based on 2017-18 academic year data. Arkansas does a particularly good job of serving 3-year-olds, compared to the national average of 5.5 percent of children that age enrolled in state-funded preschool programs.

As in Arkansas, more children nationally are attending state-funded preschool programs, but funding generally has failed to keep pace, undermining classroom quality. “We are disappointed by the lack of progress and concerned about how many children miss out on quality early learning experiences that can make a lifelong difference,” said NIEER Founder and Senior Co-Director Steven Barnett, Ph.D. “Some states are moving in the right direction, but many are standing still.” 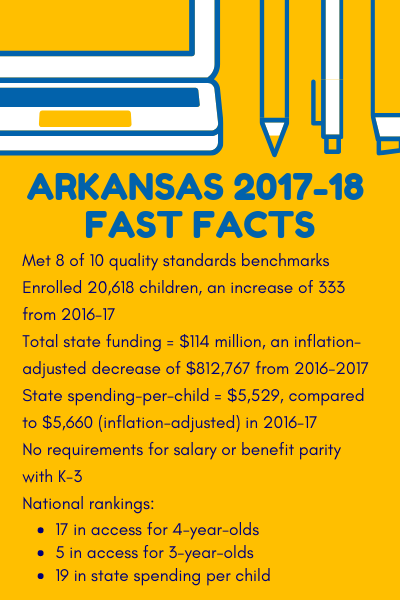 With the support of AACF staff and our partners, state legislators began addressing education levels and salary parity for early childhood educators this year. In the 2019 legislative session, the Arkansas Senate took steps to help close the income gap and provide incentives for further educational attainment by proposing tax credits based on early childhood teachers’ education levels. While the measure passed out of the Senate, time ran out on the bill before it could become law. We are taking steps to have the proposal revisited in the next regular session.

Additionally, Arkansas Rep. DeAnne Vaught is introducing an interim study to determine the feasibility of moving early childhood teachers with bachelor’s degrees under the pay scale of teachers certified under the Department of Education.

Nationwide, almost 1.6 million children are enrolled in preschool, more than double the number since 2002. But expansion has slowed in recent years. In some states, slow growth is due to a shift from part-day to full-day programs, which can better support child development, as well as family work schedules, but nevertheless leaves many children underserved.

The State of Preschool 2018 yearbook was supported with funding provided by the Heising-Simons Foundation. For more information and detailed state-by-state profiles on quality, access, and funding, please visit www.nieer.org.