However, Arkansas plummeted 12 spots overall in Health, putting it in 46th place. Though the state decreased its number of uninsured children from 6 percent to 5 percent (which is down from 22 percent when ARKids First began in 1997) low birthweight babies and child and teen deaths per 100,000 both increased slightly. The teen birth rate dropped from 44 births per 1,000 females ages 15-19, to 40, but the state maintained its 50th-place spot in the rankings. This indicates that the rest of the nation may be improving at a faster rate.

“Our economy has really rebounded in the last couple of years, unemployment is low, and that’s good for families’ economic well-being,” says Mike Malone, president and CEO at Northwest Arkansas Council. “But to continue growing and moving in the right direction, we have to ensure that we’re preparing our future workforce through smart investments in education,
health, and other areas.”

Arkansas Advocates for Children and Families Executive Director Rich Huddleston echoes Malone’s sentiments and emphasizes the importance of key policy changes. “While Arkansas’s improved economic well-being score is encouraging, specifically the lower child poverty rate, it’s important to bear in mind that 26 percent of Arkansas children — more than one in four — still live in poverty. The national average is 22 percent. We have a long way to go and must encourage lawmakers to enact sound tax and budget policies, like a state-level earned income tax credit (EITC), so that Arkansas families can find a permanent solution out of poverty.”

The Casey Foundation also recommends increasing the federal Earned Income Tax Credit for low-income workers who do not have dependents. The group says this strategy “will bolster workers, who may in fact be helping to support children who do not live with them and who are struggling to get by on low wages.”

Arkansas numbers at a glance: 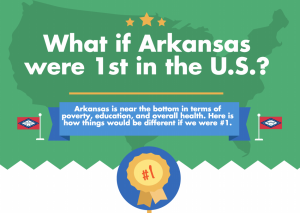 Find out what it would take for Arkansas to be #1 here.

Racial inequity remains a big issue in Arkansas and around the country. The data show that African-American children were twice as likely as the average child to live in high-poverty neighborhoods and to live in single-parent families. Latino children were the least likely to live with a household head who has at least a high school diploma. On a more positive note, African-American children were more likely than the national average to have health insurance coverage, attend pre-K, and live in families where the household head had at least a high school diploma.

“Generation Z is the most diverse yet and children of color are already the majority in 12 states. By the end of the decade, children of color will be the majority of all children in the United States,” says Laura Speer, associate director for policy reform and advocacy at AECF. “Our shared future depends on today’s young people fulfilling their potential.”

For the second year in a row, a non-New England state ranks number one for overall child well-being. Minnesota holds the top spot, followed by Massachusetts, Iowa, New Hampshire and Connecticut. Mississippi remains the lowest ranked, with New Mexico, Louisiana, Nevada and newcomer Alabama rounding out the bottom five. Along with Arkansas, Florida and Wyoming fell to the lowest five rankings in health, joining Mississippi and Louisiana.

For a handy comparison of this year’s data to last year’s, click here.