The state’s overall ranking in this year’s report improved from 41st to 40th. 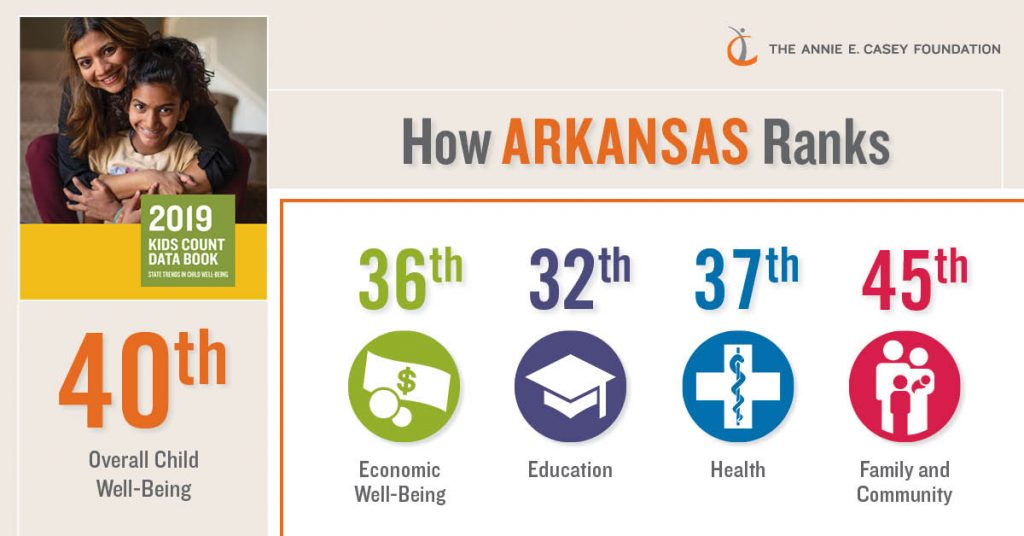 The 2019 KIDS COUNT Data Book notes measurable progress since the first Data Book, which was published in 1990. Nevertheless, more than 13 million U.S. children, including 156,000 children in Arkansas, live in poverty, and serious racial and ethnic disparities persist.

While Arkansas’s children have greater economic well-being compared to last year, the state lost ground in the health domain. Arkansas’s overall health ranking fell from 30th to 37th, with more low birth-weight babies, fewer children with health insurance (the first decline there since 2010) and more child deaths since the previous year.

Arkansas rose a place in the education domain, moving from 33rd to 32nd. The state continues to rank in the top 15 states for children attending pre-K and for high school graduation rates. However, our students need significant help in reading and math proficiency, as the state remains toward the bottom on both measures.

The data show that Arkansas’s child population grew by almost 85,000, or 13.6 percent, from 1990 to 2017. Notably, the increase was led by growth in the number of children who are Hispanic, Asian/Pacific Islander or American Indian. The number of Hispanic children grew by almost 80,000, now accounting for 12 percent of the total child population, compared to 1 percent in 1990. Both the non-Hispanic Black and White populations of children declined slightly during that time.

“The data demonstrate the urgent need to enact policies that help close our state’s persistent racial and ethnic gaps in child outcomes and the well-being of our increasingly diverse child population. We must ensure that all children have opportunities to reach their full potential because the success of all children is essential to our state’s future,” said Rich Huddleston, AACF executive director. “We can help by making greater investments in programs and policies that help keep kids healthy, educated and secure. Earned Income Tax Credits (EITC), for example, have been shown to improve low birth-weight rates, a key health indicator where Arkansas historically struggles.”

The KIDS COUNT Data Book shows how essential accurate data are to sound policymaking. In Arkansas, 22 percent of children under 5 are at risk of being missed in the 2020 Census, especially those in low-income families, those living in rural areas, and those who are immigrants and people of color. The 2010 Census missed 2.2 million such kids, and the upcoming count may miss even more, if children are not a priority. The stakes are high: 55 major federal programs, including Head Start and the Children’s Health Insurance Program, allocate more than $880 billion to states each year based on census data; Arkansas receives close to $10 billion a year in federal funding for these important programs.

Policies that can make a difference

“America’s children are one-quarter of our population and 100 percent of our future,” said Casey Foundation President and CEO Lisa Hamilton. “All of the 74 million kids in our increasingly diverse country have unlimited potential; and we have the data, knowledge and evidence to create the policies that will help them realize it. It’s incumbent on us to do just that.”

The Casey Foundation points to areas of tremendous improvement in children’s lives — including access to health care, decreased rates of teen childbearing and increased rates of high school graduation — and draws a direct line to policies that support this success. Especially as the child population is expanding, there are steps that policymakers should take to help all children thrive. The Casey Foundation calls on elected officials and representatives to:

The 2019 KIDS COUNT Data Book is the 30th edition of an annual data study that is based on U.S. Census and other publicly available data, representing all 50 states, the District of Columbia and Puerto Rico.

Videos with supporting messaging can be found here:

Video 1:
How Has the U.S. Child Population Changed Since 1990?
https://youtu.be/zK3nwD6XyHA

Video 2:
How the States Compare in the 2019 KIDS COUNT Data Book
https://youtu.be/azVcT5anaYI

About Arkansas Advocates for Children and Families

Arkansas Advocates for Children and Families is a statewide, nonprofit child advocacy organization established in 1977. Our mission is to ensure that all children and their families have the resources and opportunities to lead healthy and productive lives and to realize their full potential. For more information, visit aradvocates.org

About the Annie E. Casey Foundation

The Annie E. Casey Foundation creates a brighter future for the nation’s children by developing solutions to strengthen families, build paths to economic opportunity and transform struggling communities into safer and healthier places to live, work and grow. For more information, visit www.aecf.org.