A new study released today by the Institute on Taxation and Economic Policy (ITEP) ranks Arkansas as the 20th most unfair tax system in the nation and one of the worst when it comes to taxing the poor.

According to the report, Arkansas’s tax system is unfair, or regressive. That means the lower someone’s income, the more they pay in taxes for every dollar they earn. One key reason for this is that Arkansas relies heavily on sales taxes to raise revenue. Because those with low and modest wages spend a larger share of their income on consumer goods – like food, clothes, and other necessities – this tax hits them harder than the rich.

For example, those in the middle 20 percent of earners in Arkansas – those making $30,600 to $48,800 – pay more than five times as much in sales taxes as a share of their income compared to the top 1 percent. 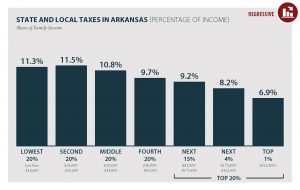 Instead of pursuing tax cuts that mainly benefit corporations and the top 1 percent of Arkansans, we encourage policymakers in Arkansas to instead consider tax relief that would promote broadly shared prosperity and that would benefit the average working Arkansan – like a state-level Earned Income Tax Credit.