Home > Tax and Budget > Changing how we tax capital gains

Changing how we tax capital gains

A relatively small number of wealthy Arkansans who make money from the sale of investments reaped the benefits from the capital gains tax cuts passed in 2013. These expensive tax cuts, however, are likely to be scaled back. Today the House Committee approved a version of Governor Hutchinson’s middle-income tax cut that reduces, instead of repeals, the capital gains exemption that was passed in the last fiscal session. Governor Hutchinson’s original tax-cut proposal fully repealed the 2013 capital gains tax cuts, lowering the exemption from 50 percent to 30 percent. This plan would have helped pay for about $22 million of the tax cuts for middle income Arkansans. The version passed by the House Committee instead reduces the capital gains exemption from 50 percent to 40 percent and makes the overall plan more expensive. Fully repealing the capital gains tax cuts would be better, but this is still a step in the right direction. Including the full repeal of the capital gains amendment would have lowered the cost of the overall tax cut package by about 21 percent. The action taken by the house committee means that another $10 million will have to be found in the budget. 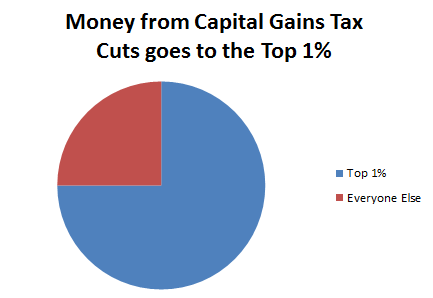 Research consistently shows that tax breaks like this do nothing to lure businesses to the state or stimulate job growth by existing businesses. There is no guarantee that wealthy Arkansans will reinvest their tax savings Arkansas. Capital gains incentives are nothing more than yet another tax break for the extremely wealthy. Arkansas already has an unfair tax system where the poorest in our state pay twice as much as the top one percent as a share of their income. Fully eliminating capital gains exemptions would help make sure everyone is paying their fair share and it would raise much needed revenue for schools, highways and other essential services.