Cheers to our Legislative Champions!

After each legislative session, Arkansas Advocates looks back and identifies legislators who stood out as champions for kids. And while there were many legislators who fought to improve the lives of children and families in Arkansas, the ones we honored at our Children’s Policy Summits in Little Rock and Bentonville went above and beyond.

Senator Bond’s advocacy for children, families, and our most vulnerable citizens was a constant during the session. Whether in the Joint Budget Committee, the Judiciary Committee or on the Senate floor, Senator Bond was a passionate voice for improving the lives of Arkansas’s kids and families. He supported policies to increase family economic security, return local control of the Little Rock School District, and lower the state’s high teen pregnancy rate.

Senator Bond proposed and led the fight for SB 304, a bill to create the Arkansas Healthy Lifestyle Education Act. If it had passed, the bill would have encouraged our public schools to educate our kids about the importance of healthy lifestyles, the dangers of risky behaviors, and the steps they can take to lead healthier lives. While the bill did not reach the House chamber, it helped promote a more informed public debate about the need for Arkansas, especially our schools, to be more proactive in educating our children about these lifestyles. 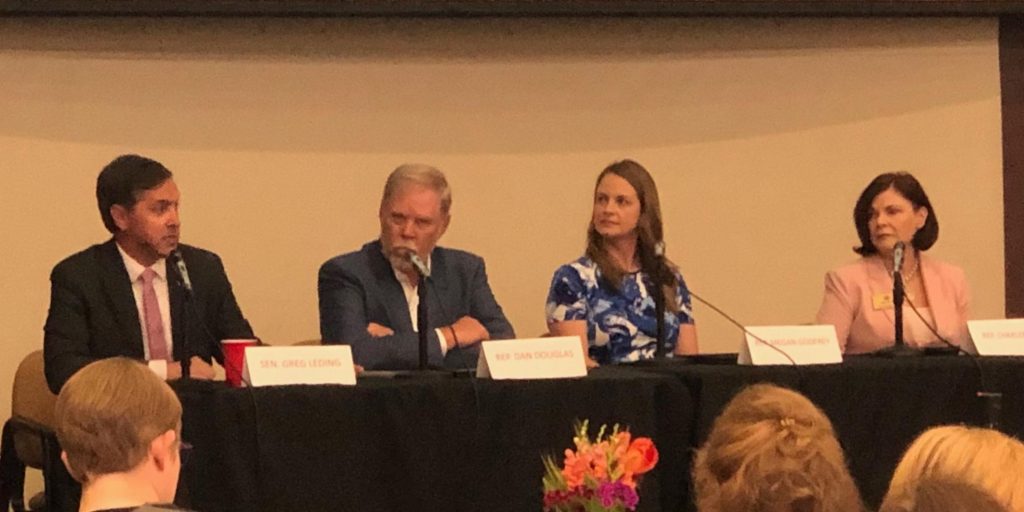 Representative Douglas had the courage to stand up on behalf of Arkansas high school graduates who are immigrants. His legislation, now Act 844, allows state-supported higher education institutions to offer immigrant students “in-state” tuition eligibility if they meet certain criteria. This is a big step toward the long-sought “DREAM Act” to extend such eligibility to all immigrant students — something child advocates and those in the immigrant community have fought to achieve since at least 2005.

Representative Douglas was tenacious in pushing for its passage — sitting for hours on end in the Senate Education Committee waiting for his bill to be heard — missing a whole afternoon of House business so he could be sure he didn’t miss the opportunity to see the legislation passed. In signing the bill at a ceremony in April, Governor Hutchinson joked that no one thought it would pass, and Representative Douglas surprised everybody by getting it done. 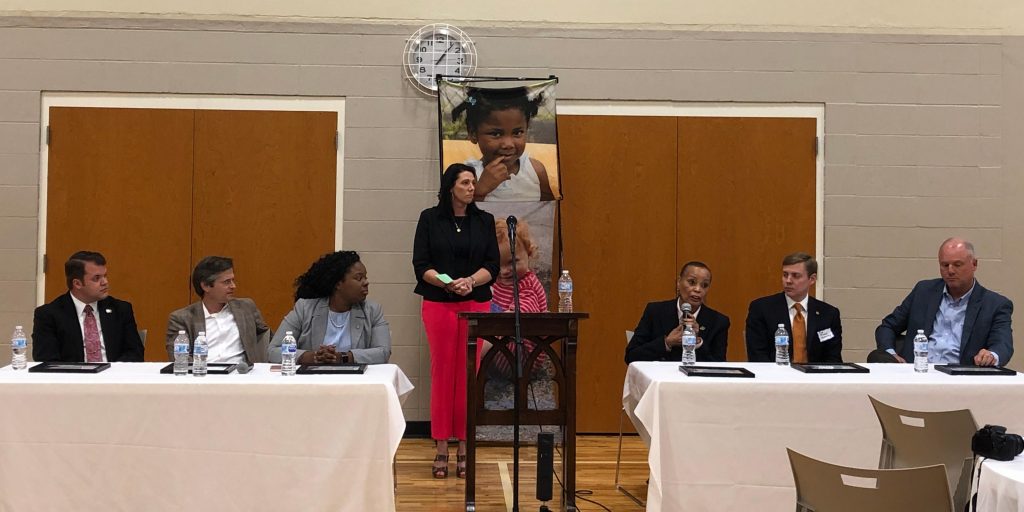 Public policy is the perfect illustration of the maxim, “If at first you don’t succeed, try, try again.” Many great policies can take years to break through and become law. In the 91st General Assembly, Senator Elliott sat in the Education Committee and advocated for banning corporal punishment in Arkansas’s public schools. When the vote was taken, she was the lone “yes” vote.

But Senator Elliott did not give up. And her perseverance paid off when SB 381, which she co-sponsored with Representative Vaught, became Act 557, banning the use of corporal punishment on public school students with certain disabilities. Senator Elliott also led the charge on many other pieces of legislation focused on improving Arkansas’s juvenile justice system, public schools and the well-being of our state’s children.

Additionally, Representative Fite passed legislation on penalties for passing a school bus, making this a bigger offense in the state, to ensure our school children are safe while going to and from school. Representative Fite also worked to pass a health bill of rights for those individuals who are deaf and hard of hearing across the state.

Senator Missy Irvin
Senator Irvin has been a strong voice for children across this state no matter their circumstances. This session she co-sponsored the bill that would become Act 189, a new law that aims to create sweeping reforms in the juvenile justice system, ensuring that fewer young people will be detained in juvenile lockups and that their lengths of stay will be shorter. The legislation seeks to reduce incarceration and to use the savings to fund to more community-based services for young people, if possible. It’s a move we’ve been advocating in favor of for almost a decade.

Senator Irvin also sponsored Act 931 to extend the life of the Youth Justice Reform Board to oversee many of the changes brought on by the new legislation. And she helped pass a law concerning the medical treatment of homeless minors, making sure they can receive the care they need.

Arkansas is the only state in the country that does not have an implied warranty of habitability for renters. What does that mean for families in the state? Some children are forced to live in unsafe conditions, with homes contaminated with mold or infested with pests. And their parents have little to no recourse to force their landlord to address these unsafe conditions. For Representative Gazaway, that was not acceptable.

He worked tirelessly with tenant advocates and realtors to craft HB 1410, which would have created basic rights to give tenants a path to get repairs made on their home or to leave unsafe living conditions without paying a hefty penalty. During the hearing of the bill, Representative Gazaway would go back to one underlining point — children should not have to live in dangerous conditions, and action needed to be taken to protect them.

As soon as Representative Godfrey was elected to represent her Springdale district, she knew she wanted to file legislation that would open more opportunities for young people living in the United States under the Deferred Action for Childhood Arrivals (DACA) policy. In particular, she knew that nurses with DACA status — even after finishing their education and training — weren’t able to obtain nursing licenses to practice. It was a tall order for a freshman who is part of the minority political party, but Representative Godfrey was able to build relationships and do the behind-the-scenes work to ensure her legislation became Act 837.

At the bill signing in April, Representative Godfrey had tears streaming down her face as she held hands with Rosa Ruvalcaba Serna, a student at UAMS who will be able to practice as a nurse when she graduates in December now that the law has changed. Representative Douglas said his colleague’s success with this legislation inspired him to file his tuition-equity bill to open doors to more higher education opportunities for young immigrants.

When Senator Hendren filed SB 571, he aimed to solve several major problems. He wanted to save and improve lives by decreasing the number of tobacco-related deaths and illnesses, which disproportionately impact low-income people. He wanted to address the teen vaping epidemic, as studies show as many as 40 percent of teens having used e-cigarettes in the last month. And he wanted to resolve issues with our state’s tax system that result in the lowest-income Arkansans paying the highest percentage of their income in taxes. The bill would have created a state Earned Income Tax Credit and would have increased and established a tax on tobacco and e-cigarette products.

Senator Leding has been a consistent voice for children and families during his almost nine years in the Legislature. In his first term in the Senate, he passed several pieces of important legislation, including Act 849 that bans “child marriages” in Arkansas — raising the minimum age of marriage to 17. It also ensures that 17-year-olds who do get married have notarized proof of parental consent. His Act 937 requires that state officials provide more training to educate school officials about the trafficking of children and how they can help prevent it.

We are always grateful for the way Senator Leding uses his social media presence to help educate the public about the legislative process, shedding light on what can be a confusing process. His online efforts help break down barriers that might otherwise discourage potential child advocates from making their voices heard.

In proposing the legislation that became Act 1789, Representative Penzo responded to rising concerns among many in the legal and advocacy communities in Northwest Arkansas that there’s a growing “industry” of unscrupulous adoptions targeting young birth mothers in migrant communities. His legislation creates the felony offense of “unlawful solicitation for the relinquishment of parental rights” if a person uses coercion, threats, physical force or other means to influence a parent to give up those rights.

Representative Penzo displayed great patience and openness in working with attorneys, with adoptive families, and with many in the Marshallese community to make changes to the bill to ensure that it wouldn’t have unintended consequences for well-meaning adoptive families. The new law is now Act 1789.

This year was an important year for juvenile justice in Arkansas. Early in the session, a sweeping reform was passed that will shift low-risk children away from jail and into community-based services. But Representative Scott recognized that there was still work to be done to ensure that children in Division of Youth Services custody were treated with the recognition that they are kids, not adults. Alongside Senator Elliott, Representative Scott proposed what is now Act 971, which will largely ban the use of solitary confinement and isolation for children in juvenile detention.

Additionally, out of concern of the fact that children in Arkansas are more likely than children in any other state to have at least one adverse childhood experience (ACE), Representative Scott established an interim study to identify ways the state can better address ACEs.

Before joining the legislature, Senator Sturch was a teacher. And like many K-12 teachers, he understood the importance of early childhood education for children’s long-term success. When he learned of the difficulty of recruiting and retaining early childhood educators in Arkansas, he knew he could help make a difference.

Senator Sturch worked with early childhood advocates to create an educational incentive program for early childhood educators making below the minimum K-12 salary, so they could increase their credentials and be more likely to stay in the field. The bill passed through the Senate without opposition and helped raise awareness about child brain development and the critical role early childhood education plays in our economy.

Representative Vaught, a strong advocate for abused children in Arkansas, stood up to be the House sponsor of SB 381, a bi-partisan effort to ban the use of corporal punishment in schools for students with certain disabilities. Representative Vaught’s advocacy of the bill on the House side pushed SB 381 to become Act 557.

Thank you to our Legislative Champions

Legislative sessions can feel like both a marathon and a sprint. The staff at AACF work tirelessly with partner organizations, fellow child advocates, and lawmakers to push for policies that will improve the lives of Arkansas’s children and families. Collaboration is essential to meaningful change, and we are so thankful for the legislators named above, and many others, for their willingness and enthusiasm to work with us.