A group of legislators from states with some of the worst tax and education records in the nation convened in Arkansas last week to advise our Tax Task Force on how to be more competitive. According to the presenters (who hailed from Kansas, North Carolina, Oklahoma, and Indiana), being competitive boils down to having the lowest tax rates.

If it was true that lower rates spur growth by encouraging businesses to relocate, legislators wouldn’t, or at least shouldn’t, have agreed to come advise Arkansas on how to lower taxes. The truth is, “tax rate competition” between states, a major premise of tax cut ideology, is unsubstantiated. There happens to be a mountain of evidence from years of empirical economic research that will tell you the same thing: people and businesses almost never move for tax reasons.

The assembled group acknowledged multiple times that tax policy does not solve all problems, that a growing economy depends upon improving quality of life and educational opportunities, and not gutting budgets. State Senator Brandt Hershman from Indiana said, “Taxes are important, but they are not the only reason for business location … you have to look at it holistically.” And still, at the end, they seemed to conclude that the only way to stay afloat is to have a tax rate lower than everyone else around you.

Those lowered rates are leading to big problems in many of the visiting states. Some of these states, especially Kansas, represent a virtual worst-case scenario for Arkansas tax policy. Kansas famously slashed taxes, expecting an economic boon, and instead got a crippled budget and shuttered schools. Almost all of the visiting speakers emphasized the need to change taxes over time, a sidestep to the known Kansas disaster of abrupt cuts. Now that the Kansas tax cuts have been totally and publicly discredited in Kansas and nationally, conservatives have simply moved on to the next state that they hope can better support their tax-cutting ideology (North Carolina).

This “slow and steady” plan does contrast starkly with the fast and furious tax push at the federal level. All federal senators from the four visiting states voted in favor of the hastily designed Republican tax overhaul, except for one senator from Indiana. Nevertheless, State Speaker Tim Moore from North Carolina’s House of Representatives told our Tax Task Force that tax change was all about “long-term evolution, not revolution.” Whether at the federal or state level, a slow-motion bad idea is still a bad idea.

North Carolina, which is a conservative tax-cut darling, and the most heavily represented at the Tax Task Force meeting (with five speakers present), especially plugged their slowed-down tax cut approach. Maybe this is intended to delay the inevitable, but their budget problems are already showing up. This is a good time to remember that Kansas’s tax cuts were also highly praised until the roof started falling in. Take a look at these highlights from the North Carolina economy and consider, is this really the model we want to follow in Arkansas?

Furthermore, most of the states who presented fell on the wrong side of perhaps the most important public investment of all: education. North Carolina’s per-student spending is way down (by 19.6 percent since 2008), giving them the distinction of the third largest drop in the nation during that time. They are the 11th worst state in the nation for general cuts to K-12 spending over the past decade. Oklahoma had by far the largest cuts to K-12 spending in the nation since 2008, and Kansas was somewhere in between. What do we really stand to gain from copying these types of changes? 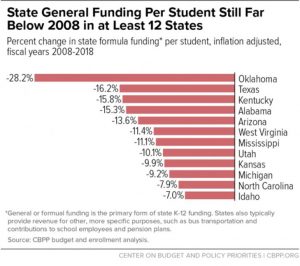 Attracting business and growing the economy is about being a place where people want to live: a place that has great educational opportunities and high quality of life. It’s flatly impossible to avoid shortchanging kids on the basic government services that they all deserve (such as a quality education) if we cut the budget without finding some other way to raise revenue. I’ll close with a final thought from James Madison: “Knowledge will forever govern ignorance: And a people who mean to be their own Governors, must arm themselves with the power which knowledge gives.”

Stay engaged and involved. Sign up for our e-newsletter so you’ll never miss an update about policy changes that impact you and your family.

Documents from the December meetings can be found here and here. The next meeting is scheduled for January 8th, 2018.