Governor Asa Hutchinson’s new tax cut proposal includes a break, at long last, for some of the lowest income working families in our state. The bones of this plan are good – it isn’t too expensive, and it includes a portion of the families making less than $21,000 a year who were left out of the last two rounds of tax cuts. However, the plan has some significant flaws. Some people at almost every income level, even the very rich, can use the low-income bracket changes because of how income is measured in the plan. This waters down the benefits to actual low-income workers, who were the original intended recipients. It is nonetheless a positive starting point, and the flaws that allow upper income taxpayers to benefit from low-income brackets can be cleaned up by switching to a tax credit approach. A tax credit strategy would keep the basics of this plan (its low cost and inclusion of low-income taxpayers) but would be more streamlined, efficient, and would put more dollars into the pockets of people on their way to the middle class.

Hutchinson’s plan does technically reduce the tax burden for people earning less than $21,000 a year, but that fact is misleading. If you ask any accountant, you’ll find that there is some fantastic breadth in the variations of what “making money” can mean. Hutchinson’s bracket changes are based on “taxable income,” not wages, salary, or even adjusted gross income. That means we would be cutting refund checks based on what your reported income is after subtracting itemized deductions, capital gains exclusions, business losses, etc. There are always going to be taxpayers with a lot of income and little “taxable income” for various reasons. You can “make” quite a lot of money, and still easily come in under $21,000 in taxable income.

Hypothetically, a tax filer with $100,000 in gross income could end up with a “taxable income” of only $15,000 a year after reducing their tax liability with various deductions. Those deductions include things like mortgage interest deductions, business losses from previous years, charitable contributions, IRA contributions, deductions for personal and dependent exemptions and deductions for business expenses and costs associated with working from home. This person could be within the “low-income” range, despite earning a gross income well above the median in Arkansas.

The flip side of this “taxable income” flaw is that it leaves out a lot of people who actually do earn very low wages. Many truly low-income families making minimum wage or living below the poverty line will gain nothing because they already have zero income tax liability. This is due to 2011 tax code changes that amended the “low-income tax tables” and eliminated or greatly reduced income tax liability for most taxpayers in this income group. That doesn’t mean they aren’t paying a large share of their income to taxes, though. The lowest income pay twice the rate in state and local taxes as compared to the top one percent in Arkansas (as a share of income). That is because, although their income taxes are low, they spend a much higher share of their paycheck on other state and local taxes like the sales tax, property tax, the fuel tax etc. In short, it is hard to help people earning less than $21,000 a year by reducing their income tax. To efficiently reduce their tax burden we need to use a tax credit.

Here is the breakdown of how Gov. Hutchinson wants to change the tax brackets. Remember that these brackets are referring to “taxable income,” which can be vastly lower than actual earnings or salaries.

A State Earned Income Tax Credit (EITC) is a more streamlined approach that benefits low-income families and the state economy. A 5 percent EITC would be cheaper than Hutchinson’s current low-income tax cut plan (only $40 million compared to $50 million), and it would put a lot more money into the hands of our most financially vulnerable working families. In the chart below you can see that a state EITC would be far more beneficial to the lowest 40 percent of earners in Arkansas. That group – who makes less than about $32,000 a year – are more likely than more wealthy Arkansans to spend any extra money in the local economy. EITCs are proven to help these families move into the middle class, and boost local businesses along the way. 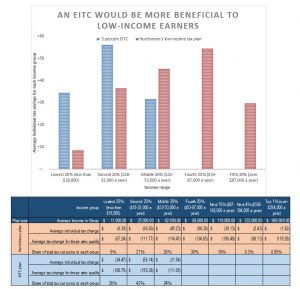 State EITCs are designed to encourage work, by growing with every dollar earned, until tapering off as families reach a more comfortable, middle-class income range. Half of the states in the U.S. are already benefiting from the proven effectiveness of state EITCs, and there is no reason for Arkansas to miss this opportunity to improve our state as well. We all benefit when we pull together to reduce income inequality, strengthen local economies, and grow the middle class. A state EITC is the most common-sense way to arrive at that shared prosperity.