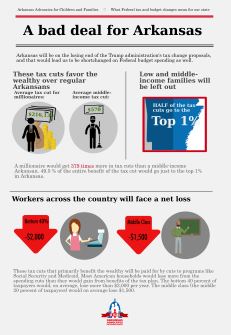 he U.S. Senate reaches some type of decision on federal health policy this week, it’s likely that the House and Senate will turn their attention to the budget resolution and tax cuts. While the budget cuts proposed by the Senate are unlikely to be as severe as those proposed in the House, one thing is certain. Both proposals are likely to set the stage for deep federal spending cuts that would fall disproportionately on Arkansas’s low and moderate-income families. At the same time, they’ll provide huge tax cuts for the wealthy and our most profitable corporations.

The current House Budget Resolution, which passed out of the Budget Committee but has not been considered by the full chamber, would be especially devastating. It lays out a broad blueprint that Republicans would like to use to tackle entitlements, discretionary funding, and taxes over the next 10 years. The House plan calls for $5.8 trillion in non-defense cuts in the next decade, including $4.4 trillion in cuts to entitlement programs that help families meet basic needs. It would cut health care for children, seniors, people with disabilities and low-wage workers, aid that helps students afford college, and food assistance that keeps families from going hungry. These cuts include:

In addition to entitlement cuts, the House Budget Resolution includes another $1.4 trillion in cuts over the next 10 years that would come from cuts in non-defense discretionary programs, including cuts to investments in our economy such as job training and education, scientific and medical research, and protecting the environment, among others.

In all, the House Budget plan would cut trillions from assistance that helps families meet basic needs and from investments that would help our economy grow. Arkansas’s low and moderate-income families would be particularly hurt under the House plan. The Center on Budget and Policy Priorities estimates that federal programs that help low and moderate-income families would shrink by more than a third over the next decade.

The impact in Arkansas would be particularly devastating. Federal aid accounts for 31 percent (or over $7.4 billion) of the revenue in the Arkansas state budget. The proposed cuts would result in a huge cost shift to the state at a time when Arkansas’s state budget is already stretched thin due to over $300 million in tax cuts enacted by the Arkansas General Assembly. The state budget already is unable to pay for critical investments in areas such as pre-k, afterschool and summer programs, child welfare, juvenile justice, and our state’s roads and highways.

The cuts would hit Arkansas harder than other states. Our high poverty rate (24 percent for children) means that any federal budget cuts would disproportionately hurt working-class families and our most vulnerable citizens. Hundreds of thousands of low- and moderate-income Arkansans benefit from investments in the federal budget. Half of children in Arkansas rely on the ARKids First program for health coverage, which federal Medicaid and Children’s Health Insurance Program (CHIP) dollars help fund.  On average, about 209,000 households in Arkansas use SNAP (the Supplemental Nutrition Assistance Program) to put food on the table. Nearly half of those households have children. About 60,000 aspiring college graduates in Arkansas also rely on financial aid from PELL Grants. The Earned Income Tax Credit and Child Tax Credit help over 910,000 Arkansans move towards financial stability.  Arkansas families would have a hard time meeting basic health and nutrition needs, and there would be less federal support for investments that help children and families move ahead in areas such as child care and college financial aid.

The House Republican budget plan would hurt Arkansas’s working families in yet another big way. It would create a fast-track process for Congress to pass a partisan plan for massive federal tax cuts — under the guise of “tax reform” and “middle class tax cuts” — with most of the benefits going to the wealthy and profitable corporations. While the tax-cut plan is still being written by the House Ways and Means Committee, it is likely to contain many of the same proposals of the plan that President Trump released back in April. Low- and moderate-income families would receive few of the benefits and would be left to pay the tab for the tax cuts, most likely through even more cuts in entitlements programs. You can read more about the Trump tax plan and what it would mean for Arkansas families here.

Arkansas’s children and families deserve a federal budget and a real tax reform plan that invests in them. Any budget resolution that Congress passes should be based on four key principles:

Arkansas is a working-class state. We should demand that our Congressional delegation stand up for us.

Take a look at our federal tax and budget info-graphic here.