Earlier this year, we talked about how schools disproportionately suspend and expel Black youth. The conversation has reemerged with new reports showing that Arkansas schools continue to punish Black youth harsher than their peers in disciplinary practices. Sending kids out of school as punishment is a long standing problem. But there are more productive, evidence based alternatives that other states are trying.

Arkansas has studied school discipline over the past few years because of legislation championed by AACF and our partners.  In early 2013, AACF released a report on racial disparities in school disciplinary practices. Later that year, the Arkansas General Assembly passed ACT 1329, which requires an annual study on school discipline practices in Arkansas. The law also requires the finding to be reported before the State Board of Education. The Office of Education Policy conducted the study on school discipline practices in Arkansas. During a report before the State Board of Education, OEP confirmed that children of color are given longer punishments for the same infractions. Schools vary in how they punish children. The analysis finds that children in high minority, high poverty schools are stricter when disciplining students. But, it also finds that school discipline influences student achievement. Students who are punished harsher are more often the students who have lower grades and test scores.

A recent study from University of Pennsylvania offers district level data for all of the Southern states. The findings tell us three things: 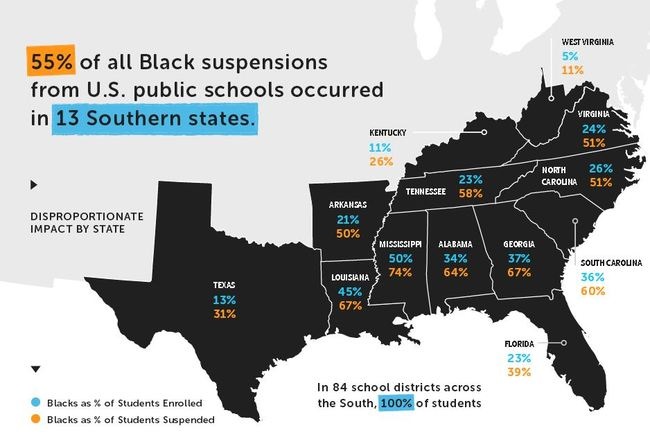 Youth are experiencing suspension and expulsion as early as preschool. At one point, Black children made up nearly half of school suspensions nationwide.

Studies continue to show us that suspensions don’t work. Time out of school for youth with behavioral issues doesn’t change behaviors. It actually creates other problems that affect students over time. Time away from the classroom means less learning. The more time a student spends out of school, the more likely they are to have lower grades, drop out of school, and get involved into criminal activity. The school achievement data referenced by OEP connects to what we know about absenteeism from the classroom. Children with low academic performance need to be in school, not out of school. A restorative justice approach is more effective than suspending or expelling students.

States with high suspension rates could take note from Illinois who recently overhauled zero tolerance policies within their state.  They did this as an effort to reduce the amount of time students spend out of school and get students with behavioral problems the help they need. Starting in 2016, schools in Illinois must use all other intervention approaches available before expelling or suspending students longer than 3 days. For students that are suspended longer than 4 days, schools will be required to offer support services like mental health counseling and academic tutoring.   This new approach also allows students to make up assignments missed.

The U.S. Department of Education is leading a campaign on changing school discipline methods called “Rethink Discipline.” They are encouraging schools to:

On this site, they have tools and resources available for school administrators, educators, students, parents, and community members on this issue.