A new report shows that Arkansas continues to stand out amid other southern states with one of the lowest rates of uninsured people. According to U.S. Census data released today, only 9.5 percent of Arkansans were uninsured in 2015. This great success is due to the state continuing to provide affordable coverage to low-income adults that are eligible for the Medicaid expansion program. Additionally, many families were able to get help paying for their coverage on the insurance marketplace. For two years now, Arkansas has benefited from health care reform, and especially Medicaid expansion, which helped reduce the number of families without health insurance in 2015.

This annual report from the U.S. Census Bureau was released today and provides data health coverage in the nation. The report shows that the insured rate decreased by 1.3 percent between 2014 and 2015. This means that around 29 million more people became insured. According to the report this increase was seen across private and public insurance coverage.  Medicaid enrollment was only second to employer-based insurance. 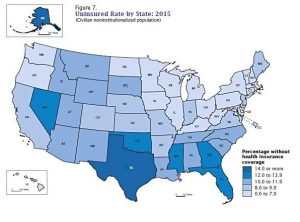 Additionally, the data shows that adults were more than twice as likely to be uninsured as children in 2015. Like Arkansas, many states have been successful at enrolling even more children in coverage now that their caregivers have new coverage options. In Arkansas, over 80 percent of children who obtained coverage since the implementation of Medicaid expansion were eligible for ARKids First. These findings highlight the importance of the Medicaid program. Medicaid is a cornerstone of health care in this country for people who are struggling just to make ends meet, and since we expanded eligibility to help more people, the health care system is stronger than ever in Arkansas.

You can also check out our blog post on poverty data, some of which was released today.

Note: This is the second post in a four-part blog series on new poverty and health Census data. Stay tuned for several updates this Thursday, when even more data will be released.