Problems down the road with governor’s highway plan

There’s a real need for new highway funding, but without some form of fuel tax increase, millions of new dollars for Arkansas’s roads and bridges means someone is going to be left holding the bag.

The governor wants to get through the first year by spending down some of the rainy day fund and using part of remaining surplus funds. As far as short term solutions, it could be a lot worse. But big problems with the Governor’s plan show up in year two and beyond. The plan leaves a number of important questions unanswered. Most concerning is: how will we handle the unprecedented withdrawal of general revenue funds, which are already taking a beating from the most recent two rounds of tax cuts? If the state fails to replace the funds taken out of general revenue, and there is no guarantee that they can or will be able to do so, the list of critical services that could be on the chopping block is long and alarming. Think of programs that protect abused and neglected children, kids in pre-k or afterschool and summer programs, public defenders and firefighters.

The solution is a modernized fuel tax

We need to modestly raise Arkansas’ gas and diesel taxes and index them to inflation as well as fuel efficiency. Starting off with just a 2.5 cent per gallon increase (which will cost about 37 cents extra every time you fill up your 15 gallon tank) will more than meet the governor’s first year highway funding totals with no need to raid the rainy day fund or surpluses. After the first 2.5 cent increase, we can cap those increases at 1.5 cents per year. That means that every year you’ll pay less than one extra quarter each time you fill up (assuming a 15 gallon tank). Small annual increases like this mean we won’t have to go back to the drawing board year after year. If you’re afraid of higher taxes, keep in mind that if our gas tax kept up with inflation, it would be 29 cents per gallon today. Instead it has been stuck at 21.5 cents per gallon since 2001. You can bet that the cost of construction has gone up since then.

This indexed fuel tax alone will fund over $150 million in highways needs annually by year five (Hutchinson’s plan only gets us to $81 million by then). That $150 million takes zero dollars out of general revenue or the rainy day fund. A modernized, indexed fuel tax is the only reasonable way to keep up with rising highway maintenance costs without continually going back to the well of state general revenue. 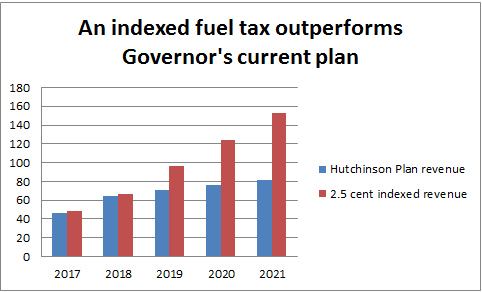 The problem with the fuel tax is that, like most sales taxes, it is hardest on low-income working families. That is why any effort to keep this tax change “revenue neutral” has to start with an EITC (“Earned Income Tax Credit”) to help these families keep more of what they earn. An EITC would help the bottom 20 percent of earners in Arkansas, the only group left out of the recent $242 million in tax cuts.

Low fuel taxes are hurting our neighboring states, too

The governor pointed out that other nearby states have lower fuel taxes than we do.  So, he implied, if they can do it without higher taxes, why can’t we? The short answer is that all of those state are making some painful sacrifices (like bond debt, private tolls, and gutted education funds) in exchange for their low fuel taxes, and they still have crumbling infrastructures.

Let’s take a closer look at what is really going on in each of our neighboring states. Hint: they are all desperate for highway revenue, and some budgets are turning cannibalistic- attempting to gobble up other funds like education to satisfy infrastructure.

You might be surprised to find that funding highways with a 2.5 cent fuel tax increase would cost the average middle income Arkansan $25 a year. I think most of us would be willing to pay that extra 50 cents a week to have decent roads and prevent cuts to public services (like schools, parks and police protection). We have to make a decision. We cannot have functioning public services and safe roads while eternally refusing to increase any taxes.