Arkansas needs quality pre-K if we’re serious about making advances in education and workforce development in a relatively poor state. Thankfully, we have that with our very popular and well-regarded Arkansas Better Chance (ABC) program. It’s been proven effective time and again, but it needs continued bipartisan support to maintain its high-quality status.

In pre-K, quality is everything. It’s the difference between long-term academic gains and questionable results. Those who’ve attended high-quality programs are more likely to graduate high school, less likely to be arrested, more likely to attend college and are half as likely to need special education.

In Arkansas, we have a quality program, and we need to ensure it stays that way by supporting it.

Are we sure it works? Springdale Superintendent Jim Rollins told us that his teachers see “the difference between night and day” in poor students who’ve attended ABC and those who haven’t. He’s so sold on its effectiveness – and the overall savings to the district – that he continues adding seats and now has one of the largest ABC programs in the state.

Do the gains last? Critics of pre-K investments question whether these gains fade over time, but the studies they point to haven’t taken quality into account. Anytime you choose one study to focus on, you won’t be getting the whole picture. So let’s look at the big picture. The National Institute for Early Education Research looked at 123 studies – a really, really big picture – and found that for quality programs, pre-K effects did not disappear and indeed remained years later. In their report, they found that long-term effects included gains not just in academic achievement – though that is key – but also in social-emotional development and increased high school graduation.

Isn’t that what we’re shooting for in Arkansas?

The NIEER report – again, not one study, but a look at many studies – also found that underfunded programs with low standards produce few significant benefits. Higher-quality programs have produced major long-term gains, and the higher the quality, the more long-term the gains. This is why we need to focus on quality in Arkansas, ensuring that we prioritize funding again so we don’t lose the gains we’ve made in Arkansas Better Chance.

NIEER and Rutgers University studied the Arkansas Better Chance program specifically, reporting positive effects on children’s math, literacy and language skills through fourth grade. We will lose those gains if we don’t support ABC in the state budget.

Pre-K is not a cure-all for the effects of child poverty. It’s one of the opportunities children need to have a better chance. We still need a strong K-12 system, but that system is stronger when children enter kindergarten better prepared to learn. 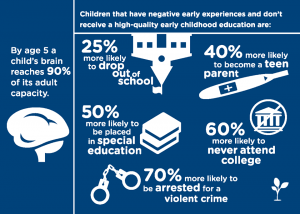 —Image courtesy of the Helen Walton Early Childhood Initiatives Center. More information on the center is available at https://ecicnwa.org/.