It’s been more than a decade since the Great Recession officially ended, and unemployment rates across the nation have reached historic lows. That’s also true in Arkansas, where the unemployment rate averaged 3.8 percent in 2018 based on an analysis of census data by the Economic Policy Institute. The most recent available data from the Bureau of Labor Statistics on unemployment rates for states in our region are 3.4 percent in Arkansas; 4.3 percent in Louisiana; 5.1 percent in Mississippi; 3.2 percent in Oklahoma; 3.5 percent in Tennessee; and 3.4 percent in Texas. However, this economic prosperity has not been shared broadly and equitably among every group of Arkansans. Black and Latinx Arkansans continue to struggle to find employment at greater rates than White Arkansans and continue to make lower wages in the jobs they do have.

Low unemployment rates signal a strong job market and a healthy economy. Very low unemployment rates put pressure on employers to raise wages as they compete for employees in tight labor markets. At 3.8 percent, Arkansas’s unemployment rate in 2018 was about average for our region and slightly below the U.S. average of 3.9 percent, according to an analysis of Census data by the Economic Policy Institute: 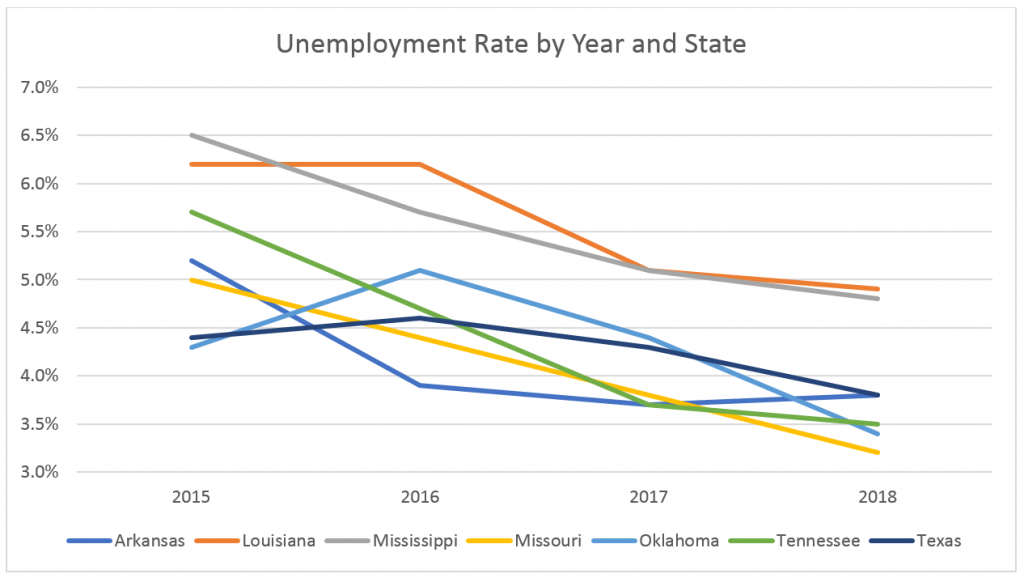 Despite these low unemployment rates, Arkansans still struggle with low wages – as of 2017, 22 percent of Arkansas’s children were in poverty. But these top-level numbers obscure some disparities lying underneath, specifically how different racial groups are experiencing this record low unemployment rate. With an unemployment rate of 6.8 percent, Black Arkansans are more than twice as likely as White Arkansans to be unemployed: 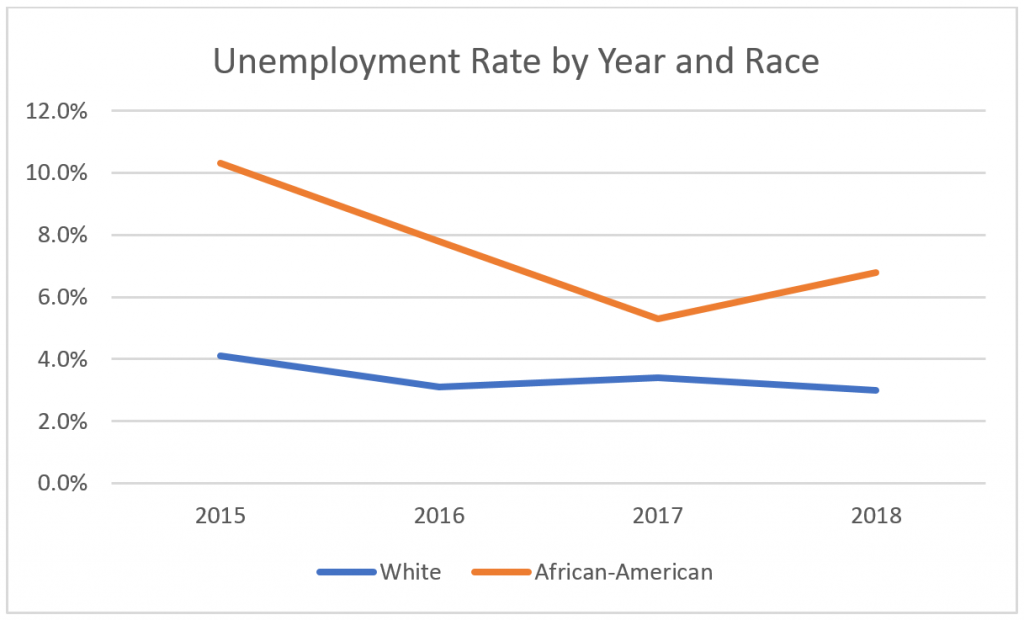 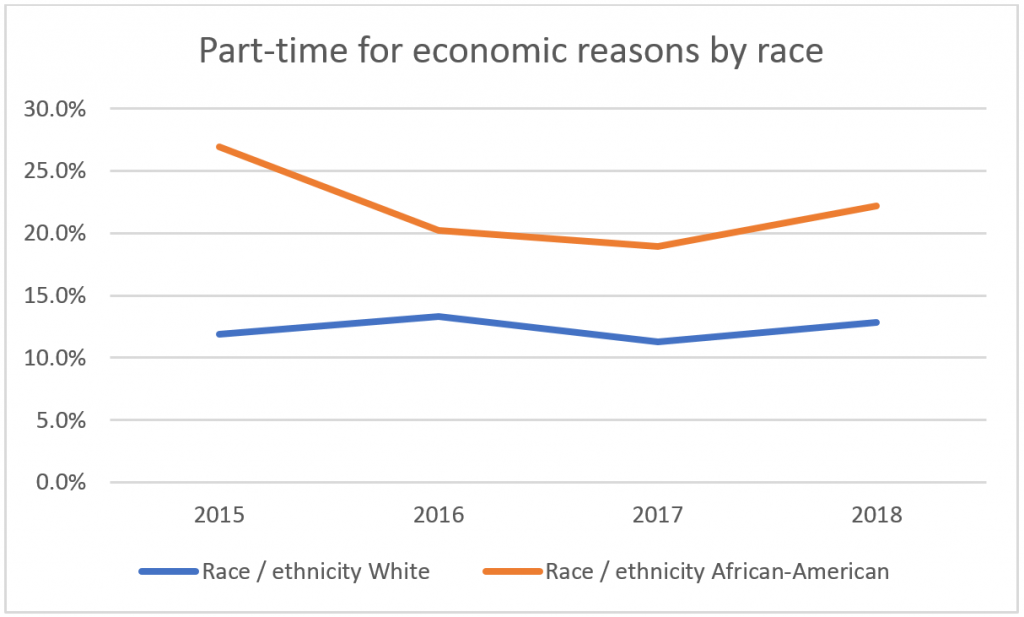 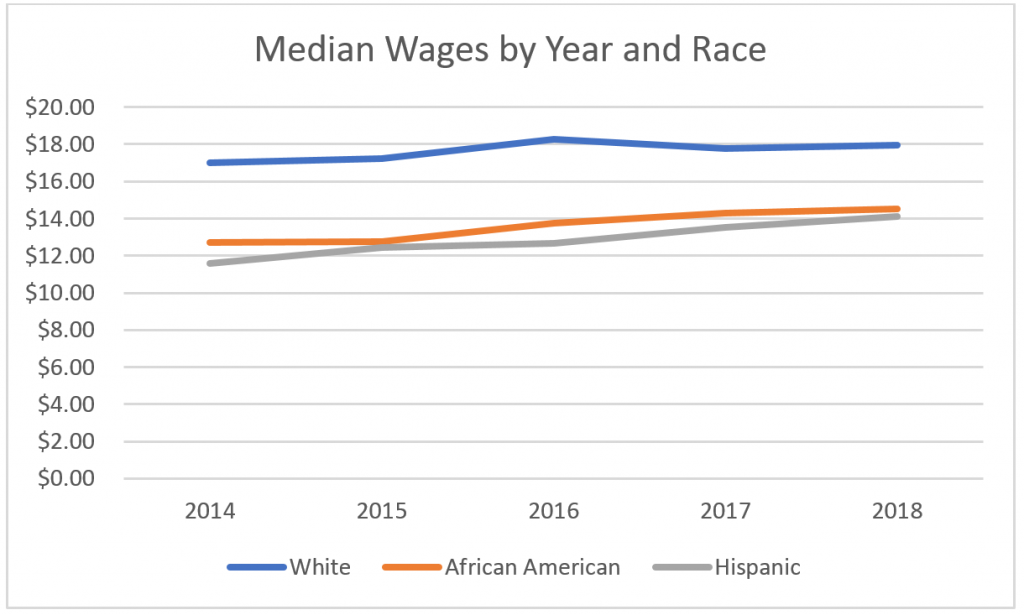 Obviously, despite a historically low unemployment rate, Arkansans face other structural barriers to obtaining economic prosperity. Working-class households of all races have enjoyed only small gains in income over recent years, but communities of color also face unique challenges in the labor market stemming from both historical racist policies like redlining and current-day discriminatory hiring practices.

There is no single policy intervention that will address all these interlocking issues, but Arkansas made great strides last year by voting to increase the minimum wage to $11 an hour. An analysis we released then showed that hundreds of thousands of Arkansas’s workers would see their wages go up, including 61,000 Black workers and 33,000 non-White Hispanic workers. Another tool Arkansas should use to fight low wages and child poverty is a state-level Earned Income Tax Credit. As we’ve discussed at length in the past, the EITC is one of the best tools states have available to lift children out of poverty; improve infant and maternal health; and help improve kids’ education outcomes.

Can a state, or even a country, where many children live in poverty, celebrate economic growth and consider itself truly successful? Is an economy strong if many working members cannot afford safe housing, nutritious food and quality health care? What is the purpose of economic strength, if not to ensure that all children have what they need to thrive? When we look at measures of economic success, we should be looking at how all the children are doing. Because short-term gains will mean very little if we fail even some of our kids.