Home > Economic Security > Tax Proposals Target Benefits to Those at the Top, Corporations

Tax Proposals Target Benefits to Those at the Top, Corporations

The Arkansas Legislative Tax Reform and Relief Task Force’s recommendations would make the state’s tax system even more regressive than it already is. According to a new analysis by Arkansas Advocates for Children and Families and the Institute on Tax and Economic Policy, the net overall impact of the combined recommendations would actually raise taxes on the neediest Arkansans. At the same time, it would target a bigger share of the decrease to those with the highest incomes.

In addition, the proposals would reduce state tax revenue and take hundreds of millions of dollars out of the state budget. When you factor in the cuts to the budget that such a large reduction in revenue would necessitate, the task force’s own consultant reported that Arkansas’s economic productivity would decline if all their recommendations were in place.

The recommended changes would move us backwards and away from the task force’s own goal of “fairness to all individuals and entities impacted by our state tax laws.” Here’s a look at the task force recommendations’ effect on taxes as a share of income, from the lowest incomes to the highest: 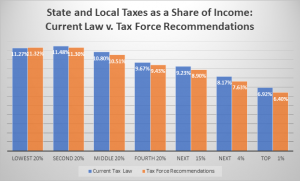 Background: Who Pays Taxes in Arkansas?

A good tax system is fair, in that it is based on a family’s ability to pay. A good tax system is also adequate; that is, it can generate enough revenue to support vital state programs and services. As a whole, these recommendations do not address the goals set forth for the task force and fall short on the principles of adequacy and fairness that are necessary for a well-functioning state tax system.

The Arkansas Tax Reform and Relief Task Force was created by Act 79 of 2017 to examine and identify areas of potential reform within the state tax laws and to recommend legislation for the general assembly to consider during the 2019 regular session that begins in January 2019. The original goals of the legislation were to:

But to understand how the Task Force’s final recommendations address these goals, it’s necessary to understand how taxes are distributed across income groups in Arkansas right now. Arkansas’s tax system is currently regressive. That means as your income goes up, a smaller share of that income goes to state and local taxes.

The following chart shows the tax rates under current law: 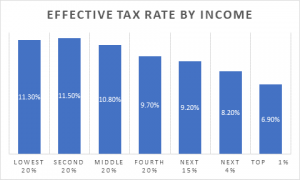 While different proposals for personal income taxes were considered, the tax task force ultimately voted to go with what they referred to as “Option A.” While nearly every state that taxes personal income has a progressive income tax structure to some degree– where your tax rate goes up as your earned income goes up – only Arkansas has rate schedules that vary by income. Option A would bring every Arkansan taxpayer back onto the same rate schedule, which brings us in conformity with the rest of the states and should be easier for state agencies to administer.

This represents a modest income tax cut for some taxpayers earning more than $21,000 in annual income. The previous rate schedules had them paying a higher rate on the first $20,999 they earned.

However, the element of Option A that has the biggest impact is reducing the top income tax rate from 6.9 percent to 6.5 percent. This is a much more substantial tax cut that only accrues to taxpayers with more than $80,000 in annual income. 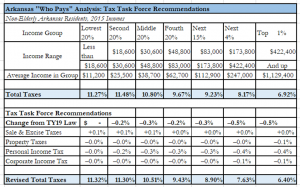 Want more detail on how each change would break down for those income groups? Here’s how the change breaks down: 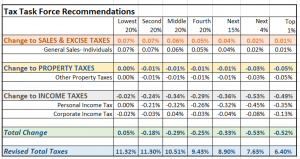 However, there are also changes to the process through which we determine how much of a multi-state corporation’s profits are subject to Arkansas taxes. This process, known as “apportionment,” is an attempt to estimate how much of a company’s activities occur in each state to calculate the share of profits that are subject to Arkansas state taxes.

The task force recommended two major changes to this apportionment process in Arkansas; first, they recommend Arkansas change our formula to be based on a “Single Sales Factor” rather than including information on corporate property and payroll in the apportionment calculation.

Most states, including Arkansas, use what is known as the ‘destination rule’ in determining where to assign a sale for apportionment purposes. For instance, if a Tennessee business manufactures a machine and sells it to a customer in Arkansas, this sale counts towards that business’s total Arkansas sales, and does not count toward its Tennessee sales.

Understanding that highlights the logic behind the single sales factor recommendation. Multi-state companies with no physical presence in Arkansas but that make sales to consumers in Arkansas will have a higher share of their profits subject to state taxes than they would under our current apportionment formula. Multi-state companies that have property and payroll in Arkansas would have a smaller share of their profits subject to taxes than under our current apportionment formula. Proponents of this change argue this would help incentivize business expansion in Arkansas, particularly in industries that are capital and labor intensive, like manufacturing, though the evidence does not bear this out.[i] ()

The second and related proposal would repeal our “throwback rule,” which is intended to ensure that all corporate profits are subject to taxation in at least one jurisdiction. Sometimes when a seller from one state makes sales into another, they are not subject to taxes in either location. This problem is exacerbated by the change to single sales factor apportionment.

For example, if a business manufactures a machine in a state that has a corporate tax and sells that machine to a customer in a state without a corporate tax, neither state would be able to claim that sale for the purposes of their apportionment formula for that business. To deal with this problem, many states created a “throwback rule,” where that sale would be “thrown back” to the state of origin and would be taxed in the origin state.

Proponents argue that the throwback rule is complicated to administer and deal with, for both state agencies and businesses themselves, which thus makes Arkansas less competitive from a business standpoint. But when repeal of the throwback rule is combined with the change in the apportionment process to a single sales factor, the vast majority of the tax benefits would accrue to corporations outside of Arkansas according to an ITEP analysis of the tax force recommendations. Moreover, the Arkansans who would benefit from a cut to corporate taxes are those at the highest income levels. An extensive evaluation by the non-partisan Joint Committee on Taxation found that the benefits of corporate tax rate cuts mainly go to wealthy shareholders, not workers. The net impact of these changes in personal and corporate income taxes would be to make Arkansas’s tax system even more unfair.

While none of the income tax proposals would result in a net increase in taxes for taxpayers in any bracket, the benefits largely accrue to the very highest income-earners in Arkansas. The top 1 percent, those making more than $422,400 a year, would see two times the tax cut of those making between $18,600 and $30,600 as a share of their income.

But the biggest piece of sales tax reform is the recommendation to require out-of-state-sellers without a physical presence in the state and who have more than $100,000 in sales or at least 200 sales transactions in Arkansas to collect and remit back to the State of Arkansas any sales and use taxes owed by Arkansas residents on the purchases they make. These taxes are already owed under current state law, but the responsibility for tracking and filing them falls on consumers. This provision, sometimes referred to as an “internet sales tax,” would raise roughly $35 million in revenue ($24 million of which would be available for general revenue).

Unlike the combined proposals for corporate and personal income taxes, the sales tax proposals are revenue raisers for the state. Because people with low and moderate incomes are more likely to spend a higher share of their income on consumption, they are more likely to spend a greater share of their income on sales taxes. Accordingly, these sales tax increases would impact all Arkansans, but especially those making less than $48,800 a year.

There are some elements of the tax reform package that are sorely needed to modernize our state tax system and bring us into the 21st century. And there are some modifications that make it more efficient for taxes to be reported and collected administratively.

However, the overall package raises taxes on the poorest Arkansans while cutting taxes mainly for the top 1 percent. This moves us backwards and away from the goal of “fairness to all individuals and entities impacted by our state tax laws.”

Moreover, the major loss of revenue from these proposed tax cuts needs to be addressed directly by this legislature. If all of the task force recommendations were implemented, state revenue would decrease by at least $350 million annually, representing an almost 10 percent cut to the state general revenue budget. Relying on tax triggers simply hits the pause button on the conversation and requires the tough choices about what programs to cut to be made by someone else in the future. We need to deal with these issues before we enact any major tax cuts – not after.

Major Features of the Tax Plan

Sales and Use Taxes

[1] Institute on Taxation and Economic Policy (2018). Who Pays? A Distributional Analysis of the Tax Systems in All 50 States. https://itep.org/wp-content/uploads/whopays-ITEP-2018.pdf