This is why we can’t have nice things

Arkansas would have returned to a normal pace of revenue growth, with plenty of room to pay for cutting edge schools, home visiting care for the elderly, and an appropriate number of caseworkers to protect abused and neglected children – if only we didn’t shoot ourselves in the foot with tax cuts year after year. Our ability to pay for roads, after school programs, updated parks, and excellent libraries would have grown at twice the rate over the past 5 years if we had not implemented extensive tax cuts in the last two legislative sessions.

The graph below shows (in gray) how much state general revenue we have collected since 2014.[i] The green bars represent the accelerated revenue growth we would have seen without the last two rounds of tax cuts. In 2017 the expected annual impact of the tax cuts from the last two sessions amounts to a monstrous $242 million dollars in lost revenue. That $242 million would have made the current scramble to fund highways a comparative cake walk. 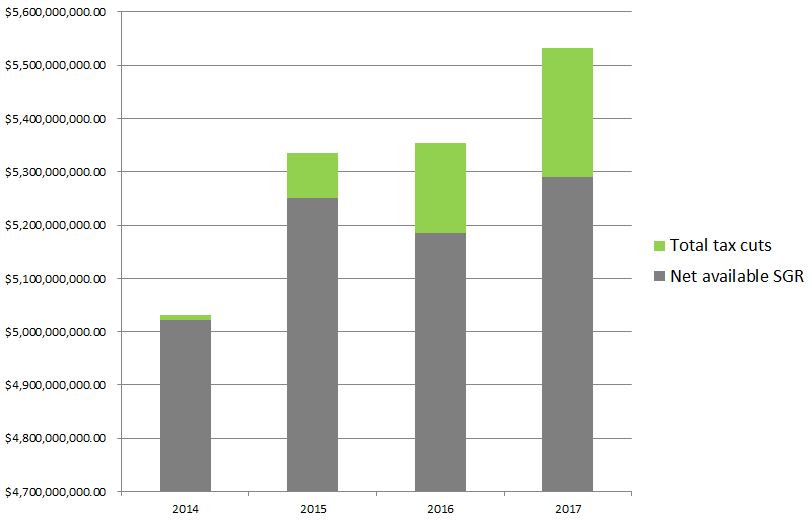 The tax cuts that keep digging us into a revenue hole are not only unnecessary, they are unfair. The lion’s share always goes to the wealthiest in Arkansas, and is usually paid for by looting public programs that everyone counts on (think librarians and quality pre-K centers). Tax cuts for the rich are siphoning off the revenues that could have gone to repairing our struggling foster care system and other public services that are scraping by, including highways and schools. We are not getting our money’s worth from these tax cuts; we need to redirect this revenue back to public services for hard working Arkansans.

December 2, 2015 at 7:00 am
Northwest Arkansas, Tax and Budget
Jennifer Ferguson