Our improving job numbers in Arkansas are due in part to the effect that $600-per-week unemployment supplements have had as they circulated through our economy. Losing them now would be disastrous.

Arkansas’s unemployment rate fell again in June to 8 percent. This rate is still more than twice as high as the unemployment rate before the COVID-19 pandemic in February, but it represents modest improvement over 10.2 percent in April. Unemployment Insurance helped create the demand that moved those numbers.

In economics, “demand” refers to the ability and desire of a consumer to purchase a good or service. The public health pandemic caused a sharp drop in demand in the “in person” sector that led to these job losses, as the nature of the public health crisis caused businesses and people to maintain social distancing guidelines. But the federal stimulus money included in the CARES Act helped boost the economy. One particularly important part of that is the $600-per-week boost to Unemployment Insurance (UI): 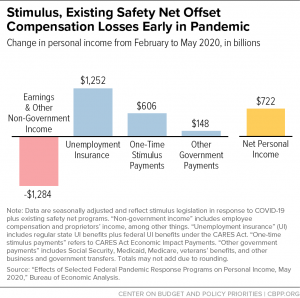 These payments helped to mitigate the impact of the historic level of job loss, which meant low-income households only had a slight drop in spending. Getting resources quickly to struggling households so they can continue to buy food and pay rent is a cost-effective way to stimulate the economy.

That’s why cutting off the additional $600 in weekly benefits would be bad for the economy. One estimate shows that Arkansas would lose nearly 30,000 jobs because of the drop in demand. And many more families than that would struggle to afford to keep a roof over their heads or put food on the table.

These benefits are set to end soon if Congress doesn’t act, and the next round of legislation must extend the $600 weekly UI enhancement until the economy recovers. That doesn’t just help Arkansan families survive the ongoing public health crisis, but helps keep the economy afloat, too.