Today, on August 7, 2018, Arkansas Advocates for Children and Families celebrates the 10-year work anniversary of Laura King Kellams, the amazing director of our Northwest Arkansas (NWA) office, who helped launch that office a decade ago. The impact of Laura’s work has been monumental. She has increased the awareness of AACF and our work, but more importantly, she has been our voice for children and families in the region. Working with AACF board members and supporters in NWA, she has elevated the importance of issues facing children and families in the region, especially the impact of child poverty. The well-being of vulnerable children and families and the issue of child poverty are a much higher priority in the region now than they were a decade ago. Laura deserves much of the credit for that through her advocacy work in our NWA office. But her work has also led to real policy changes for children and families. During the 2017 state legislative session, Laura worked with state legislators in the region and played a major role in securing health care coverage for Marshallese children and other immigrant children in our state. Her great advocacy work has been recognized nationally. In 2017, she was the recipient of the “Bulldog Award” from the Georgetown Center for Children and Families for her work on the immigrant child health issue. Click the photo below to watch a special 10-year tribute video about Laura. 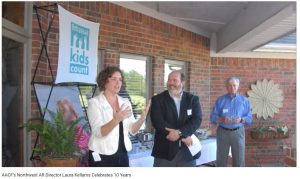 What are the qualities that make Laura such a great advocate and leader? She is passionate about the issues we work on and is steadfast in her commitment to improving the well-being of Arkansas’s most vulnerable children and families. She is respected by policymakers and others on both sides of the political aisle. She avoids the policy wonk speak, knows how to get to the heart of the issue, and is incredibly effective at communicating about why an issue is important and why it matters for kids. Laura genuinely likes people and they like her, and this has helped her build many partnerships and relationships in the region. Perhaps most importantly, while she always looks to bring people together on the issues, she is not afraid to use her advocacy voice when it’s warranted and call out policymakers and others when they are not doing right by our kids. In short, she is an effective voice and strong advocate for Arkansas’s children and families. AACF, Northwest Arkansas, and the children and families in Arkansas are fortunate to have her. So on behalf of the AACF staff and board, our supporters, and the children and families of Arkansas, thank you Laura for your 10 years of service and advocacy! We know the next 10 years will be even better! –Rich Huddleston, AACF Executive Director