The teen birth rate is one of the indicators used in the 2021 KIDS COUNT® Data Book to determine the overall well-being of Arkansas’s children. This indicator is part of the Family and Community Context domain, as teen births have significant consequences, not only for the teen parents, but also for the babies born to teens. 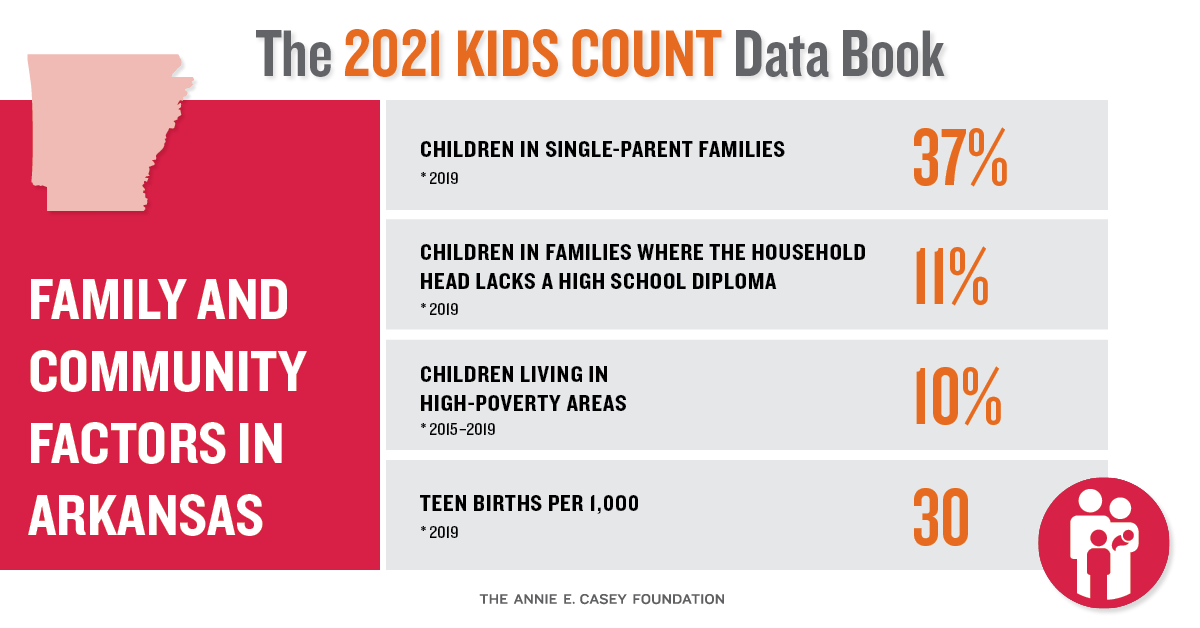 Our state’s improvement has been steady, and the decrease over the decade amounts to a 45 percent drop. All progress deserves to be celebrated, but it’s important that we acknowledge that other states have worked more aggressively to lower their rates.

States that have had the most success, and the lowest teen birth rates nationally, do a much better job than Arkansas at educating young people about preventing pregnancy.

For example, since 2010, Massachusetts has decreased its teen birth rate from 17 to just 7 per 1,000, a 59 percent decline. They are tied for the No. 1 ranking nationally now, and that status is partially attributed to the state’s implementation of the Massachusetts Teen Pregnancy Program. This state-funded program funds 13 agencies in 15 communities with high teen birth rates. The agencies provide evidenced-based teen pregnancy prevention curriculum as well as youth development programming. The purpose of these services is to increase access to evidenced-based teenage pregnancy curricula, increase protective factors for high-risk youth, and reduce the rate of teenage pregnancy for these targeted communities. Youth have access to these services in their schools, community-based programs, and within foster care. From 2009-2013, Massachusetts’s teen birth rate decreased by an average of 11 percent per year. Most importantly, all of the targeted communities with high-risk youth saw a significant decrease in teen birth rates.

New Hampshire, which is tied with Massachusetts in the number. 1 ranking, has been in the top 10 for the past decade for lowest teen birth rates. The rate has dropped from 16 per 1,000 in 2010 to 7 per 1000 in 2019, a 56 percent decrease. One reason for their success is the Title X Personal Responsibility Education Program (PREP). This federally funded program provides medically accurate, evidenced-based, age-appropriate comprehensive sex education that empowers youth to reduce risk of unplanned pregnancies and sexually transmitted infections. It’s also focused on aiding in the development of social and emotional skills so that young people can create healthy relationships and make better decisions for their sexual and overall health. This program is available for both male and female adolescents and young adults up to age 21.

The states that score lower in the rankings have something in common: a lack of comprehensive sex education within school settings. In Mississippi, currently ranked 49th for teen birth rates, public schools must adopt either an “abstinence only” or an “abstinence- plus” curriculum. This means that schools have the option to teach about waiting to have sex until marriage or teaching that model along with information about contraceptives and sexually transmitted infections. It’s also important to note that that all its school districts were required to implement the following: separation of boys and girls for teaching of sex education materials, parents having to opt-in for their child’s participation, and not allowing for physical demonstration of contraceptive methods, such as condoms. Mississippi’s teen birth rate is 29 per 1,000 females.

Alabama is another state that has continued to rank near the bottom with high teen birth rates. Its rate is 26 per 1,000 females. Alabama public schools are not required to teach sexual education. If state public schools decide to teach sexual education, the curriculum must be centered on abstinence. The coursework emphasizes the importance of “self-control” and “ethical conduct” pertaining to sexual behavior. Recent legislation requires that, beginning July 1, Alabama will be required to update current sexual education documents to match current medical guidelines. This is a major win for health advocates and a step toward a more comprehensive sex education for the Alabama.

Arkansas public schools are not required to teach sexual education beyond HIV information. If schools decide to teach sex education, the coursework must use abstinence-focused preventative programs. Current curriculum is not held to any standard to ensure that the information provided is medically sound, age-appropriate, culturally appropriate, unbiased, or not promoting religion.

Arkansas recently passed the “Arkansas Student Protection Act,” which will prevent public schools from having any relationship with an organization that provides abortion services. This means that organizations like Planned Parenthood won’t be able to provide sex education in Arkansas, the state with the highest teen birth rate in the country. The state has refused to prioritize comprehensive sexual health education to not only target birth rates but also sexually transmitted infections.

As a state with such poor outcomes for teen birth rates, infections, and teen pregnancies, Arkansas needs to be expanding education to its youth rather than restricting it. Of course it’s safer for every teenager to remain abstinent, but believing they will — in the face of decades of evidence to the contrary — is not a strategy.

If Arkansas wants to make the kind of progress that other states have seen over the last decade, we should adopt medically accurate, evidenced-based, culturally competent, pregnancy-preventative, comprehensive sex education,  especially targeting high-risk communities. This program will need to be accessible to all young people throughout the state in a variety of settings. If we don’t, we should expect to remain 50th for the long term.