Home > Tax and Budget > Equitable Economic Development Part 1: Why Tax Breaks for Business are a Bad Deal for Public Budgets

Equitable Economic Development Part 1: Why Tax Breaks for Business are a Bad Deal for Public Budgets

Job creation and economic growth are key political issues, and policymakers are under pressure from a variety of constituents to produce results in these areas. Maybe that’s why policymakers have increasingly turned to business tax incentives — such as property tax abatements for business firms or tax credits for job creation — in order to induce economic growth, with one study estimating that the value of these incentives tripled between 1990 and 2015.

In this blog series, Equitable Economic Development, we will explore why tax breaks for businesses are harmful for public budgets, what evidence shows is a more successful approach to economic development, and how Arkansas could modify its policies to more equitably grow our state’s economy.

The logic behind tax breaks for businesses is straightforward. States and localities compete against one another for businesses, and incentives are supposed to encourage businesses to locate in one state or locality over another, or to expand hiring in one state or locality over another. For instance, Arkansas’s “Motion Picture Incentives” offers production companies a rebate equal to 15 percent of production and post-production costs, and a 10 percent rebate on payroll. This is intended to reduce the costs of filming in Arkansas relative to other states by reducing the company’s tax burden, in the hopes of enticing production companies to choose Arkansas.

Sometimes it is claimed that these tax breaks pay for themselves because of the additional tax revenue from the new jobs created and the “multiplier effect” this has on the local economy.

There are a couple of problems with this story. First, tax burden is a relatively small share of the overall costs to businesses deciding to locate a new firm or expand an existing facility. All state and local tax payments combined represent less than 3 percent of the total expenses of the average corporation. Taxes paid are dwarfed by salaries, compensation, and the cost of goods sold, so the presence of a skilled workforce, the availability of infrastructure to get products to market, and other logistic constraints are more relevant considerations for most business location decisions. Due to these other considerations, a recent study estimated that only about 10 percent of incentives “tip” businesses to decide on one location over another. In 9 out of 10 cases, incentives have no impact.

That is the other issue with attempting to use tax benefits to induce economic growth. Many firms claim tax breaks or other subsidies for investments they would have undertaken regardless, which in turn means that states and localities are foregoing tax revenue without getting anything out of it. But those lost tax dollars necessitate an increase in other taxes or reductions in public services. Since spending on public services like quality education and infrastructure improvements also attract business investment, that means there is a potential for tax incentives to have a negative impact on economic growth when considering the foregone revenues.

In fact, when pricing in these unseen costs, it becomes clear that tax incentives for businesses are not a cost-effective way to induce economic development: 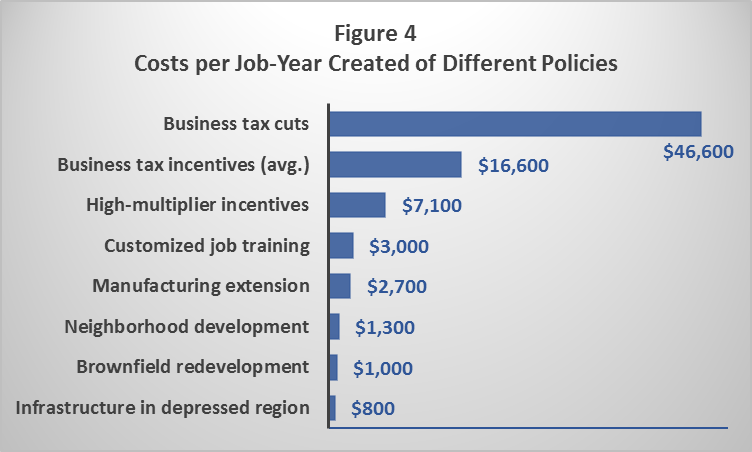 In our next blog in this series we will cover some of the alternative ways states and cities can invest in economic development in ways that are both cost-effective and equitable.