This year’s KIDS COUNT® Data Book shows that we have a lot more work to do to improve children’s health in Arkansas in several key areas. Historically, Arkansas has lagged in its overall child health ranking, according to the Data Book. Last year, Arkansas ranked 40th in child health when compared to other states. This year the state child health ranking dropped to 41. A closer look at the individual indicators provides more insight into the areas where Arkansas has room to make progress. 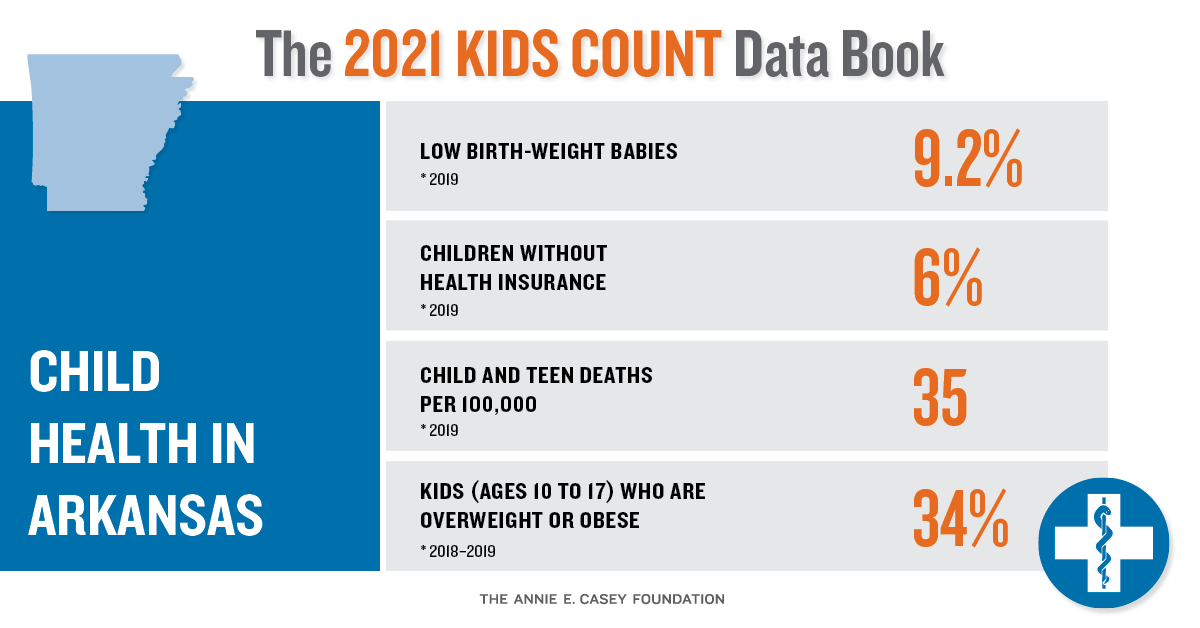 Arkansas has consistently struggled with higher-than-average child and teen deaths over the past decade. According to this year’s Data Book, our death rate among children ages 1-19 in 2019 was 35 per 1,000 kids, well above the national rate of 25 per 1,000. Between 2010 and 2019, our rate increased by 3%, and our current rank on this indicator is 42nd.

The Data Book also includes data on the percentage of teens age 10-17 who are overweight or obese as defined by having a Body Mass Index (BMI) at or above the 85th percentile. Arkansas currently ranks 36th out of the 50 states. This is substantially higher than Arkansas’s ranking of 23rd from 2016-2017, and 24th from 2017-2018. These increases  signal concern for children’s health in the state. Higher BMI in children is correlated with high blood pressure, type 2 diabetes, breathing problems, and joint problems. Childhood obesity is associated with anxiety, depression, low self-esteem, self-reported lower quality of life, and social problems bullying and stigma. With Arkansas being a rural state, many children face barriers to access to healthy foods. This is an even larger concern for those living in poverty and living within rural “food desert” communities.

The course forward should focus on obtaining and maintaining health insurance coverage and identifying any health care challenges early and treating them quickly. Ensuring that children have the care they need early can have a positive impact on their academic performance, economic stability, and health and well-being later in life.