When the COVID-19 pandemic hit, the City of Little Rock realized that an immediate need would be food for hungry children who would normally receive meals at school. Many agencies mobilized to ensure that children wouldn’t miss meals because schools had closed down. The Arkansas Hunger Relief Alliance, Arkansas Foodbank, Central Arkansas Library System, City of Little Rock, Clinton Foundation, Little Rock School District, Pulaski County School District, and World Central Kitchen partnered together to ensure that to-go meals could be distributed throughout the county at local sites so that children would have easy access to needed food. 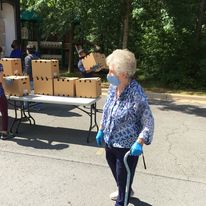 But as time went on it was clear that it wasn’t only the children who needed food. City Director Joan Adcock is used to hearing from residents all over the city about issues. But when the COVID-19 pandemic forced the shutdown of businesses and government offices in March 2020, receiving complaints on normal issues of trash not being picked up or lights being out were immediately changed to addressing hunger. “People have lost their jobs,” she heard from local residents over and over again. “They have nothing. What can we do? They need food.”

It seemed like a blessing when she heard from City Director Kathy Webb that the existing partnership would be expanded to feed families through a federal program known as Farmers to Families. Farmers to Families was a program that was authorized by the first Coronavirus Relief Bill known as “Families First Coronavirus Response Act.” Under this new law the Department of Agriculture was able to purchase and distribute cultivated food boxes to those in need. The program really had two prongs, first the Department of Agriculture would purchase food from distributors who were hurt by the closure of restaurants and other food service businesses; and then second, it would distribute the fresh produce, dairy, and meat products through nonprofits and other entities to families in need.

Immediately, Director Adcock knew that the Southwest Community Center (SWCC) was an ideal place to distribute food to needy families, as it was well known to the community, easy to access, and the Little Rock Police Department was located right there to help direct traffic. She also began to mobilize the members of the Working Together in the Community (WTITC) group to find bilingual volunteers to help distribute the hundreds of boxes of food and gallons of milk weekly to the public.

Prior to the pandemic, WTITC was a group of community people, business owners, government officials, educators, neighborhood association members, and residents that worked to unite the communities of Little Rock and make the neighborhoods better. With COVID restrictions in place, many of the educational programs that WTITC normally would put on were placed on hold. 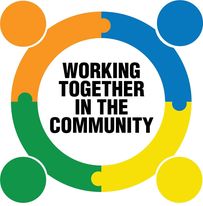 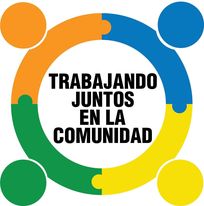 Instead, when the opportunity became available 20 – 30 volunteers signed up to help distribute meals every week. City employees from all departments also helped to organize the food distribution; distribute food; and drive food to local area apartment complexes, mobile housing areas, and senior complexes so residents who were elderly or had no transportation were able to receive the boxes. 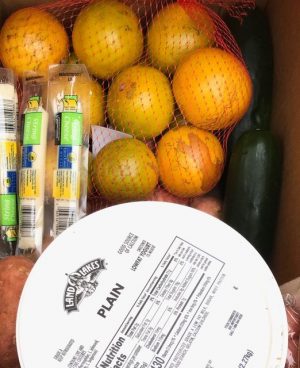 From May through December the SWCC site distributed 23,000 Farm to Table Food Boxes and 5,000 gallons of milk to families using a drive-up model. Families would drive up to the SWCC and wait patiently in line for the distribution to start. The first distribution in May had cars backed up for half a mile waiting for food. Police officers from the Southwest Patrol Division helped manage the traffic, and volunteers would ask families how many people they had in their family and put a color-coded card on the window so as they pulled up for the distribution the volunteers knew exactly how many boxes and milk to provide.

On average, the SWCC saw around 1,000 families a week for eight months. It was a diverse population of residents who needed food, as the pandemic affected everyone. Roughly 35% of the residents were Black, 55% were Latino, and 5% were White.

It was grueling work distributing the heavy boxes, especially during the heat of the summer, but Director Adcock knew it was making a difference. She explained, “I don’t know how you judge the success of feeding hungry people, but I know there was so much appreciation. At the mobile home parks, they would be waiting for the delivery every Friday because they didn’t have transportation and they knew that we would be there for them.” In addition to the food distribution the volunteers were able to distribute masks and information about SNAP, P-EBT, WIC, as well as help people complete the 2020 Census while waiting in line.

Although the program officially ended for the City in December 2020, now even nine months later people still ask if the program will return. “The pandemic hasn’t ended. For our poorest communities they still need help. Hunger is the number one issue that our residents are facing, and the City isn’t set up in a way that it can distribute meals on an ongoing basis,” Director Adcock explained. “We need more help to support our residents. This program was a huge success. It allowed us to make such a connection with our community. No one ever asked what they were going to receive in the box, they were just so grateful for the food. We still have lots of hunger in our city. Some people have their jobs back now, but they have to try to catch up with all their bills. Although there are programs now to help with rent and utilities it has been hard for families to access them. We need the program back. The families still need help with food.”