Slavery in the United States

The first documented record of enslaved Africans arriving in America occurred in 1619. “Some 20 and odd Negroes” landed at Point Comfort, in the English settlement that would soon become Virginia. Their arrival was the beginning of the system that we today call American slavery.

Over the next 200+ years, tens of thousands of Africans were kidnapped from their loved ones and forced into the dark, disgusting cargo holds of ships for a harrowing journey across the Atlantic Ocean. This journey was just the beginning of their sorrows. Those who survived were welcomed to their new “home” by being placed on auction blocks where they were shown off like farm animals and ultimately sold to the highest bidder. These enslaved people were forced to work in unbearable conditions for no compensation, literally building the United States of America. They were beaten, maimed, raped and murdered; their only fault being the color of their skin. Can you imagine?

The Anti-Slavery Movement (or Abolitionism) began in the late 1600s but it was not until the 1800s that it began to truly gain traction. Enlightenment thinkers condemned slavery as inhumane and Quakers and some denominations condemned it as un-Christian. In fact, slavery was the greatest debate of the first half of the 19th century. These tensions reached a fever pitch that ultimately led to the American Civil War, which was fought between northern and southern states and lasted from 1861-1865.

As the war raged, the Emancipation Proclamation was an executive order issued by President Abraham Lincoln on September 22, 1862, effective on January 1, 1863. The proclamation was a federal law that changed the legal status of over 3.5 million enslaved Black people from slave to free.

What exactly is Juneteenth and why is it important?

On June 19, 1865, about two months after the surrender at the Battle of Appomattox, VA, Union General Gordon Granger arrived in Galveston, TX, to notify the enslaved people of the area of their freedom and that the war had officially come to an end.

The holiday received its name by combining June and 19th. The day is also sometimes referred to as “Freedom Day” or “Emancipation Day.”

In recent years, many Black Americans have chosen to opt out of officially celebrating July 4, as a holiday of personal significance. July 4, 1776 was just another day of hard work with no pay for Black folks in America. It was not until 89 years later, on June 19, 1865 that all enslaved Black people in the United States received word of their freedom (on paper). Juneteenth is Independence Day for Black people in America.

Where we are today

When you think about it, Juneteenth represents how freedom and justice in the United States has always been delayed for Black people.

Following emancipation, a very brief period of equity and access, called Reconstruction allowed formerly enslaved Black Americans to gain a sense of normalcy. However, racism and hatred soon reared its ugly head again. Hate groups such as the Ku Klux Klan increased in prominence, Jim Crow Laws were passed across the country, Black people were lynched by the thousands and not allowed equal access to education, healthcare, housing and other necessities.

While much progress has been made in the 150 years post emancipation, we are still fighting some of the same battles our ancestors fought. National attention continually revolves back to the disparities and barriers Black people continue to face: from the impact of Covid-19 on our health to racial profiling incidents, to acts of police violence.

In the wake of the latest wave of police killings, people across the United States have chosen to take a bold stance against systematic injustice and mistreatment of Black people. People are demanding; not asking.

The last few weeks have seen:

Many people around the country celebrate the day with picnics, programs and various events. A few other ways we can all take support for Juneteenth a step further:

Attend a local event: If you’re in the Central Arkansas: 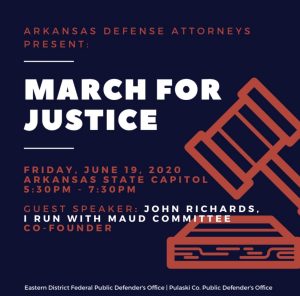 Share the historical significance of Juneteenth with someone unaware: I was surprised to recently find out how many people had no knowledge of the importance of the date. We all have a circle of influence and if we take the time to educate those around us about it, it will be a ripple effect.

Encourage your legislators to pass legislation that is inclusive of Black communities: Many historical pieces of legislation created to benefit or build the American middle class were not inclusive of Black Americans (including the Social Security Act of 1935 and the original GI Bill). All bills introduced by our legislators should have a formal process of insuring that a racial equity component is included.

Legislators prioritize what’s important to their constituents. Organize and let them know what matters to you.

Support making Juneteenth a paid national holiday: Black people built this country for free. The least the country can do is give everyone a day off of work to celebrate Black people.

The voter mobilization nonprofit NextGen America is currently circulating an online petition calling on Congress to recognize Juneteenth as a national holiday.