Despite public outcry and their subsequent failure to pass health care legislation, Senate Republicans still are attempting to find a way to “repeal and replace” the Affordable Care Act. The law expanded Medicaid coverage to hundreds of thousands of low-income Arkansans and put in place important consumer protections, like laws to keep coverage affordable for those with pre-existing conditions. Nevertheless, attempts to repeal it have been relentless.

This most recent legislation, known as Cassidy-Graham after the two lead sponsors of the bill, retains many of the most damaging features from previous bills, which we’ve discussed in the past.

It would end Medicaid expansion – known as Arkansas Works in Arkansas – and eliminate the ACA tax credits, causing millions of people to lose coverage. It replaces Medicaid expansion and health insurance subsidies with block grants to the states, but these would end after 2026, forcing states to grapple with even steeper budget cuts in subsequent years. 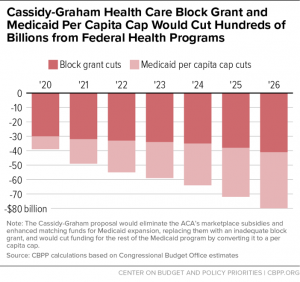 The Cassidy-Graham bill would change the way we fund Medicaid to a model that caps and cuts funding, resulting in billions of dollars in cuts. Federal funding to Arkansas alone would be cut by over $1 billion yearly by 2026 compared to current projections. This new Medicaid funding scheme, knows as a per-capita-cap model, would create a gap between the federal funding the state receives and Arkansas’ actual funding needs. If medical costs go up due to a public health emergency or the discovery of new, more effective treatments, Cassidy-Graham would leave states on the hook for the additional costs.

This dangerous cost shift to the state will put children, seniors, and disabled individuals in Arkansas at great risk. That’s because when costs go up, states would have no choice but to institute deep and growing cuts to certain services, such as home and community-based care for seniors and people with disabilities.

Ultimately, Cassidy-Graham still suffers from the same problems as the previous bills: it shifts billions of dollars in costs to the states, removes millions of people from health coverage altogether, and increases premiums for everyone else.

The failure of the previous bills revealed a better path: a bipartisan, transparent effort to strengthen the individual market and make coverage more affordable. Senators from both parties are working to develop just this type of legislation this month. The Cassidy-Graham plan would only destabilize those same markets by dramatically increasing uncertainty. That would be bad for our state economy and for the families who deserve access to comprehensive coverage that they can afford.

Senators should reject this last-ditch, partisan effort and choose to move forward on the bipartisan, market-stabilizing path instead.