President Trump’s 2021 budget proposes deep cuts to healthcare and basic assistance programs for low-income families while investing relatively little in our nation’s infrastructure. This is partially because it needs to pay for the permanent extension of the costly 2017 tax cuts that primarily benefited high-income earners, which is also included in the budget. 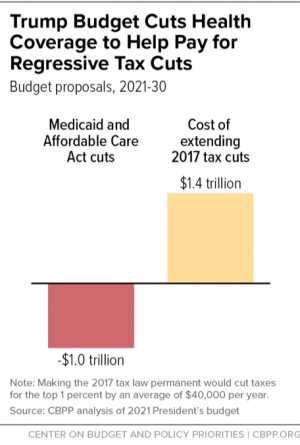 The overall budget proposal would increase income inequality and widen racial disparities. Arkansas might be especially susceptible; income inequality has increased according to the most recent census data, and low and moderate-income Arkansans pay an increasingly higher share of their income in state and local taxes than the wealthy.

On top of taking health care, food assistance, and disability benefits from tens of millions of Americans, these cuts would also put pressure on state budgets. Federal spending accounts for a large share of state budgets – for example, fully 30% of Arkansas’s state spending comes from federal grants. Cuts to programs like Medicaid, the Supplemental Nutrition Assistance Program, Housing and Urban Development and more would force state governments to cut spending or raise taxes to cover the costs.

Instead of cutting benefits to extend tax cuts that mainly benefited the wealthy, we hope that Congress will instead invest in the vital public programs that help families across the nation put food on the table, pay rent and meet other basic needs.