The governor has revised his previous tax proposal, and on Wednesday Senate Bill 211 was filed, To Create the Tax Competitiveness and Relief Act of 2019. The plan retains the three separate tax tables for Arkansans with different levels of income; the “2-4-5.9” tax table replaces the tax table that currently exists for the 1 in 5 Arkansans whose annual income exceeds $80,500. And the middle tax table would have its top marginal tax rate reduced from 6 percent to 5.9 percent for Arkansans whose annual income falls between $37,700 and $80,500. No one making less than $37,700 would see any tax cut at all.

An analysis by the Institute on Taxation and Economic Policy (ITEP) shows that the benefits of this proposal are even more heavily skewed towards the richest taxpayers than the previous version. That’s because there are no changes to the standard deduction, and all the significant changes in marginal tax rates only affect taxpayers with more than $80,500 in income. 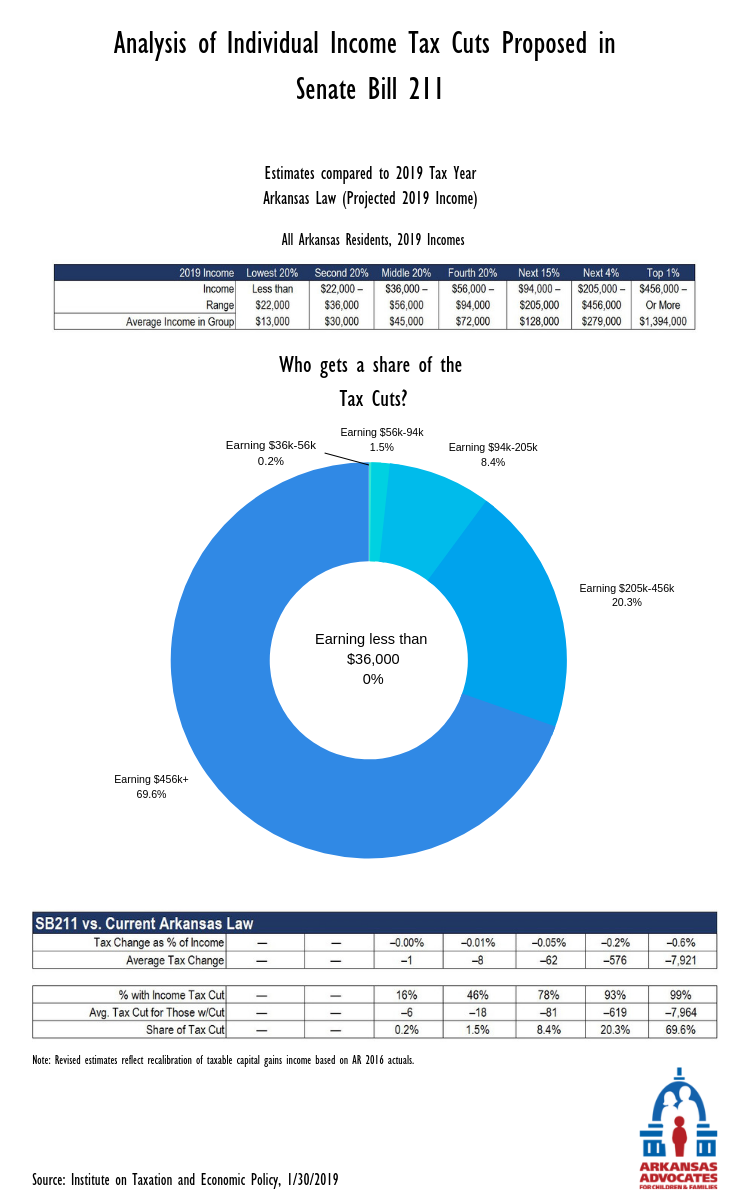 The Arkansas Department of Finance and Administration (DFA) estimates the Governor’s income tax cut plan will cost $97 million in lost state tax revenue. However, the ultimate costs are likely to be significantly higher. When modeled at 2019 income levels (instead of 2016 income levels the DFA used), estimates of the cost of the fully-phased tax cut comes in at $157 million annually according to the Institute on Taxation and Economic Policy. Because the proposed tax cut is directly tied to the incomes of upper-income taxpayers (incomes >$200,000), the cost of the governor’s proposal is going to increase as incomes of the wealthiest Arkansans do. And because incomes continue to grow much more quickly for higher-income Arkansans than low- or middle-income taxpayers, the cost of this top-heavy tax cut will just continue to increase over time.

As ITEP’s data show, the benefits of the Governor’s proposed tax cut would go almost exclusively to those at the top and leave out low- and middle-income taxpayers. It would also result in the loss of significant state tax revenue for the state budget. At a minimum it would cost $97 million and could cost as much as $157 million based on ITEP’s estimates. It would also come on the heels of at least $300 million in tax cuts that have been enacted since 2013. If adopted, the Governor’s tax plan would mean less revenue in the state budget to pay for programs that are critical to the future well-being of Arkansas’s children and families, including funding for high quality pre-k, juvenile justice reform, funding for afterschool and summer programs (the Positive Youth Development Act), K-12 education, environmental protection, and highways and roads just to name a few.

This impact on the state budget has to be considered during legislative debates over the proposal in the coming weeks.