The Governor’s Proposed Personal Income Tax Cut: Who Wins and Who Loses?

Earlier in the week we examined the winners and losers under the plan developed by the Arkansas Legislative Tax Reform and Tax Relief Taskforce. Today we examine the tax cut plan put forth by Governor Asa Hutchinson.

Governor Asa Hutchinson proposed a personal income tax cut as part of his balanced budget plan for the 2019 legislative session, released on November 14. The tax cut, which would be rolled out in two phases over four years, would result in the loss of nearly $200 million ($192 Million) in annual state tax revenue. According to a recent analysis by the Institute on Taxation and Economic Policy (ITEP), the benefits of the plan would go overwhelmingly to the state’s richest taxpayers. 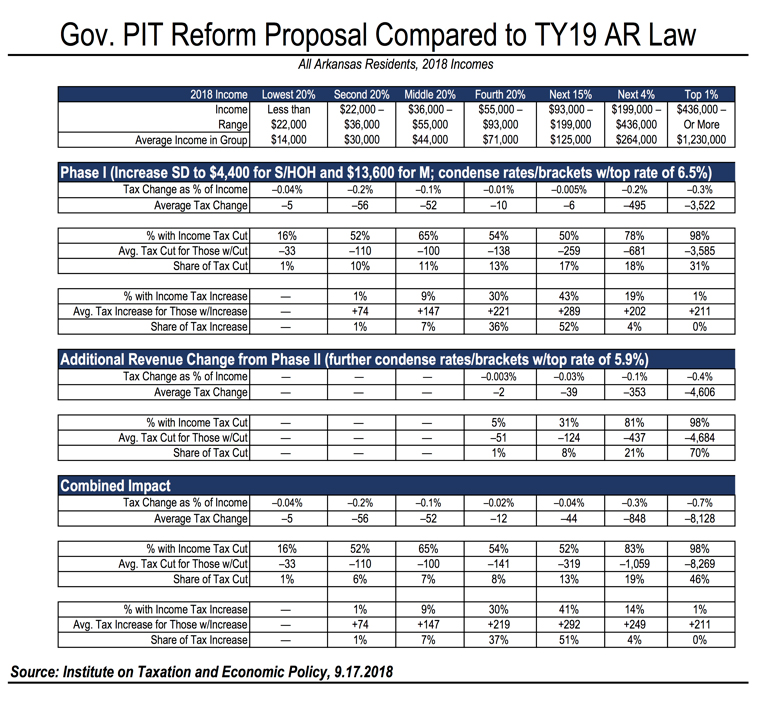 The proposed personal income tax cut would impose a double whammy on Arkansas’s low- and middle-income taxpayers. Not only would they receive relatively little of the benefits from the tax cut, they would bear the burden of the cut’s impact on the state budget. The tax cut will eventually result in the loss of nearly $200 million in tax revenue that could be used to pay for the many (and growing) unmet needs in our state budget. This means less money in the state budget for critical programs that could help our children and families thrive and succeed. It also means less money for the investments that would grow our state’s economy and help ensure that all children and families, not just those at the top, sow the benefits of Arkansas’s economic growth. But the state budget is the subject for another post on another day. Stay tuned.