This week could also be titled, “The Week That Wasn’t,” “Snowmageddon,” and “Antarkansas.”

Thanks to back-to-back, record-setting winter weather events, the Arkansas’s 93rd General Assembly recessed for the week. We thought we would do something a little different with weekly update and provide an overview of bills we think are the most critical to track under our mission.

We are monitoring many more bills, listed and frequently updated on our website. More information on AACF’s overall legislative priorities is here.

Bilingual Education: Rep. Megan Godfrey and Sen. Clarke Tucker are sponsoring HB 1451. This bill would allow a public school district to adopt a bilingual program or a dual-immersion program approved by the Division of Elementary and Secondary Education. Currently, the law only allows educators to communicate with the student in the student’s native language to facilitate the student’s ability to become proficient and learn in the English language. Status: With the House Education Committee.

Scholarship Eligibility for Lawful Permanent Residents: SB 287, sponsored by Sen. Bart Hester and Rep. Clint Penzo, would allow recipients of certain state-funded scholarships to include lawful permanent residents, those with visas and those who are migrants from Compact of Free Association islands, such as the Marshall Islands. Current law states that only citizens can obtain those scholarships. Status: Scheduled to be heard by the Senate Education Committee on Monday, Feb. 22.

Marshallese Law Enforcement Officers: Rep. Megan Godfrey and Sen. David Wallace’s HB 1342 would allow those born in the Marshall Islands, who are lawfully residing in Arkansas but are classified as “nonimmigrants” under federal law, to serve as law enforcement officers. Currently, only citizens are allowed to serve, though a rule change may allow service in some local departments. HB1333 by Rep. Penzo has the same aim and similar wording. Status: With the House Committee on State Agencies and Governmental Affairs.

Expanding Professional Licensure to Certain Immigrants: Rep. Penzo’s HB 1378 would authorize professional licensure for people from islands that are part of the Compact of Free Association with the United States. In Arkansas, that’s mostly people from the Marshall Islands. Status: With the House Committee on Public Health, Welfare and Labor.

Changing Enrollment Funding: SB 142, sponsored by Sen. Keith Ingram and Rep. Bruce Cozart would support public schools and open-enrollment charters that have been unable to accurately track changes in their average daily membership by changing how declining enrollment funding is calculated for the 2021-2022 school year and beyond. Status: With the Senate Education Committee.

John Walker as Civil Rights Leader: HB 1029, sponsored by Rep. Fred Allen, would add John Walker to the list of civil rights leaders in the teaching materials regarding African American history in public schools. John W. Walker (1937-2019) was a lawyer who emerged from segregated schools and society in southwestern Arkansas to wage a 60-year war on discrimination in Arkansas’s education systems, public institutions and workforce. From 2011 until his death, Walker was a member of the Arkansas House of Representatives. He received numerous awards during his lifetime and was inducted into the Arkansas Black Hall of Fame Status: Passed the House; now with the Senate Education Committee.

Holocaust Education: SB 160, sponsored by Sen. Bart Hester and Rep. DeAnn Vaught, would require that, beginning in 2022-23, all public school districts include teaching of the Holocaust and its causes. The curriculum must encourage tolerance of diversity “and reverence for human dignity for all citizens in a pluralistic society.” A previous version would have begun the requirement next school year. Status: With the Senate Education Committee.

Restrictions on Solitary Confinement of Juveniles: Rep. Jamie Scott and Sen. Alan Clark are sponsoring HB 1470. This bill would prohibit placing a juvenile in solitary confinement in a juvenile detention facility if the juvenile: is pregnant; has delivered a child within the past 30 days; is breastfeeding; is suffering from postpartum depression; or is caring for a child in a juvenile detention facility. Exceptions to the prohibition would apply if the juvenile has engaged in violence while detained or there is reasonable cause to believe that solitary confinement would reduce the imminent risk of injury/death to another person. Similar conditions and exceptions would prohibit adult inmates from being placed in restrictive housing. Status: With the House Judiciary Committee.

Hate Crimes Bills: Sen. Jim Hendren and Rep. Fred Love are the sponsors of SB 3 and HB 1020. They have bipartisan co-sponsors for a law that would increase penalties by no more than 20 percent for crimes in which an offender targets a victim because of their race, ethnicity, national origin, gender identity, sexual orientation, disability, religion, homelessness or military services. Arkansas is one of only three states that doesn’t have such a law on the books. Status: With the Senate Judiciary Committee and the House Judiciary Committee, respectively.

Abolishing Slavery: Rep. Vivian Flowers is sponsoring HJR 1021. This proposed constitutional amendment would fully abolish slavery in Arkansas. It would repeal the part of the Arkansas Constitution that allows slavery and involuntary servitude as punishment for a crime. It states that, if prisoners are working, they should be compensated for that labor with either money or “good time” to shorten their sentences. Status: With the House Committee on State Agencies and Governmental Affairs.

Law Enforcement Integrity: HB 1007, sponsored by Rep. Fred Love, would create a new Arkansas State Police division to investigate alleged abuses of power by law enforcement. It would establish a hotline for reporting alleged abuses and would create a searchable database of officers who have been accused. Status: With the House Judiciary Committee.

Voter Suppression: HB 1112, filed by Rep. Mark Lowery, would amend the state constitution to effectively end the right to vote for people without certain forms of ID. Right now, people can vote in person or absentee provisionally by signing an affidavit to affirm their identity. The county clerks then verify the voters’ identities using voter registration records, and the election commissioners then count the ballots based on the clerks’ recommendation from reviewing those records. This would end the option to sign an affidavit, so that people who do not own a qualifying ID could no longer exercise their right vote. If you own an ID and forgot to bring it to the polls or submit it with your absentee ballot, you could vote provisionally and submit your ID to the county clerk or election commission office by 12:00 noon on the Monday following the election. Status: Passed the House; now with the Senate Committee on State Agencies and Governmental Affairs.

Limiting Safety-Net Program Eligibility: Sen. Scott Flippo and Rep. Robin Lundstrum are sponsoring SB 295. This bill would change many aspects of eligibility for the Supplemental Nutrition Assistant Program (SNAP) and Medicaid. It would make it more difficult for the state and for hospitals to provide temporary Medicaid services to low-income people who are likely eligible for the program, which is known as “presumptive eligibility.” It would require that state agencies and commissions share information often to determine whether SNAP and Medicaid recipients have lottery or gambling winnings, whether they’ve gone to prison, or whether their job circumstances have changed, among other changes. After the current health emergency, it would require the Department of Human Services to quickly make determinations on whether to unenroll many Medicaid recipients who’ve had continuous coverage during the pandemic. Status: With the Senate Committee on Public Health, Welfare and Labor.

Using Taxes to Pay for Private School: Rep. Ken Bragg and Sen. Jonathan Dismang are sponsoring HB 1371. This bill would create a new voucher program — the Arkansas Child Academic Opportunity Scholarship Grant Program — to pay for scholarships to K-12 private schools; expand student eligibility for private school voucher beyond the current Succeed Scholarship Program to include students up to 200 percent of poverty; allow voucher funds to be used to reimburse public school districts that provide services to students receiving private school vouchers at an amount up to 1/6 of the state foundation funding that the public school district would have received for each course the student is enrolled; create an income tax credit program for taxpayers who contribute to private school voucher program with a total income credit cap of $10 million; require that the $10 million cap on income tax credits be automatically increased by 25 percent the following year if credits claimed exceed 90 percent or more of the cap; and require future 25 percent increases in the income tax credit cap if credits claimed are 90 percent or more of  the new cap. Status: With the House Committee on Education.

Stand Your Ground: SB 24, sponsored by Sen. Bob Ballinger and Rep. Aaron Pilkington, would remove the duty to retreat, under certain circumstances, from Arkansas’s self-defense law. Status: Passed the Senate; scheduled to be heard by the House Judiciary Committee on Tuesday, Feb. 23.

Censoring History and Social Justice in Schools: Rep. Lowery and Sen. Stubblefield’s HB 1231 aims to reduce funding to schools that include in their curriculum the “1619 Project.” That’s the New York Times’ sweeping investigation of the history of racial disparity in the United States, beginning with the first slave ships that arrived here more than 400 years ago. The companion bill, HB 1218, aims to withhold partial funding from public schools and colleges that allow courses, classes or events that “advocate for the isolation of a group of students” based on certain characteristics, including race, ethnicity, gender, religion, social class, or political affiliation. Status: HB 1231 failed to pass out of committee two weeks ago, and Rep. Lowery publicly stated his intention to withdraw both HB 1231 and HB 1218. Both bills remain on the State Legislature’s roster, however.

Tax Cuts for the Rich: Rep. John Maddox’s HB 1403 would alter the top income tax rate in a way that primarily benefits the most affluent Arkansans. Status: With the House Committee on Revenue and Taxation.

Double-Dipping on Tax Deductions: HB 1361, sponsored by Rep. Les Eaves and Sen. Jonathan Dismang, would allow businesses that received loans through the Paycheck Protection Program to deduct from their taxable income the business expenses they paid with the money, even if the loans were forgiven by the federal government. Status: With the House Committee on Revenue and Taxation.

Corporate Benefits at the Expense of Medicaid: HB 1316, sponsored by Rep. Lanny Fite and Sen. David Wallace, would eliminate a tax on the manufacturers and wholesalers of soft drinks that funds the Medicaid Trust Fund. Status: With the House Committee on Revenue and Taxation.

Are you a member of the Arkansas’s Digital Advocates group on Facebook? If not, sign up to join us here. This week several members shared their favorite snowy pictures. Get in on the fun! 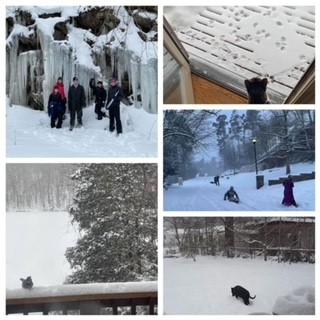