Arkansas is on a bumpy, but at least downhill, path towards lower poverty rates according to census data released this morning. While still far above national averages, our child poverty rate is down to about 24 percent. It hasn’t been this low in a decade, but that is still nearly one in four kids growing up in poverty. This news is also tempered by remaining racial inequities. We aren’t there yet, but we can create thriving, equitable communities for everyone with smart policy choices that promote things like education, healthcare and public safety. 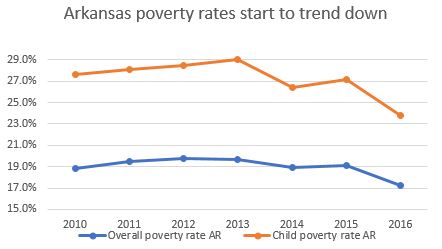 Arkansas, like most of our neighboring states in the South, has above average poverty rates. Even though we are improving, we still rank near the bottom (43rd) in child poverty. That means that a large portion of our future workforce – our future teachers, doctors and farmers – are growing up without the tools they need to do their best. 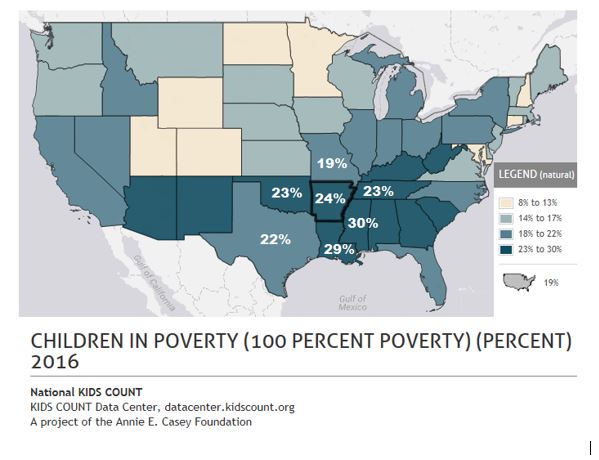 Many kids in Arkansas do not start out with the same opportunities to succeed and fulfil their potential. Very young kids and minority groups are among the most likely to live in poverty in our state. About 28 percent of kids under 5 in Arkansas live in poverty. Kids under 18 fare slightly better in comparison, with poverty rates at 24 percent. Children of color also tend to have higher than average poverty rates in our state. Hispanic children under 18 grow up in poverty at twice the rate of their white neighbors. Black children face even harsher disparities in child poverty rates – reaching 43 percent in 2016. 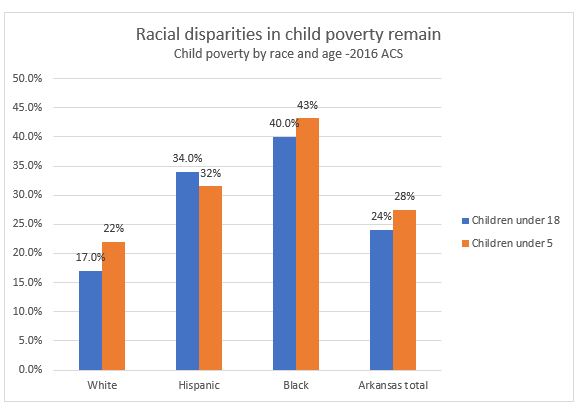 There is much work to be done at the state and federal level to ensure that growing economic prosperity reaches every corner of Arkansas. Policies like SNAP (the Supplemental Nutrition Assistance Program) and refundable tax credits (which have yet to be enacted in Arkansas) help parents who are struggling to make ends meet and help to reinforce our economy. Programs like these are also shown to greatly improve school achievements for kids. Building strong communities depends on these key investments, especially in states like Arkansas where poverty rates stubbornly remain high even in good times.

Take a look at our analysis of census data released earlier this week on health and income.