Note: This blog is fourth in a series of posts covering the findings in the 2018 Annie E. Casey Foundation Kids Count Data Book. To read the introductory blog post, click here; the second, on economic security, here; and the third, on education, here.

Last week, the Annie E. Casey Foundation released the annual Kids Count Data Book, which examines and ranks each state across 16 indicators for child well-being. Historically, Arkansas has lagged in its overall child health ranking. Last year, Arkansas ranked 46th in overall child health. This year, the state appears to have moved up quite significantly to the 30th-place slot.  However, there were changes to how the composite scores were calculated, which means the health ranking is not comparable to the previous year’s data. A closer look at the individual indicators provides more insight into the area where Arkansas has room to make greater progress.

At 8.8 percent, the rate of low birth weight babies remains about the same as in 2010. This figure is also slightly higher than the national rate of 8.1 percent. Unfortunately, the rate of child and teen deaths also has not seen much improvement since 2010, which keeps Arkansas in the bottom 10 states.

Following the national trend, Arkansas has continued to make progress in reducing the number of uninsured children in the state. This indicator shows the most remarkable improvement among the four health indicators. Only 4 percent of children in the state are uninsured. In 2010, we had 46,000 kids living without health insurance. That number has since dropped to 26,000. Thanks to the Affordable Care Act, along with Medicaid and CHIP, families have more affordable coverage options for their children than ever before.

The report also includes data on the percentage of teens who abuse alcohol or drugs. It should be noted that the data source for this figure underwent a major change in 2015, so the latest numbers cannot be compared to historical data. According to the Kids Count Data Book, 10,000 teens in Arkansas abused alcohol or drugs in 2015/2016, the latest years for which data is available.

Arkansas still has along way to go to get to number one. The right prescription to improve child health in Arkansas must focus on not only protecting access to affordable coverage, but also addressing barriers that still prevent children from getting the care that they need. The course forward should focus on identifying any health care challenges early and treating them quickly. Ensuring that children have the care they need early can have a positive impact on their academic performance, economic stability, and health and well-being later in life. Watch the short video below to learn more. 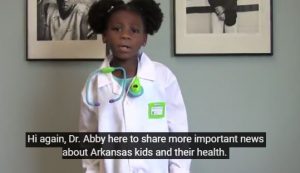 You can see the Arkansas-specific data here.