In Arkansas, too many families of color struggle to make ends meet. Arkansas families as a whole experience hard times with nearly one of every five persons living below poverty. But income disparities for communities of color are disproportionately higher.  The newly released census data confirms that we still have work to do in leveling the playing field and making a prosperous Arkansas for everyone.

The Census data tells us three key things about race and income in Arkansas. A larger share of Black and Hispanic Arkansans live in poverty. In 2014, 1 in 3 Black Arkansans and roughly 1 in 3 Hispanic Arkansans lived on less than $24,000 a year for a family of four. This means that poorer families made so little money last year that affording basic needs – like child care, nutritious meals, and reliable transportation – became a challenge. 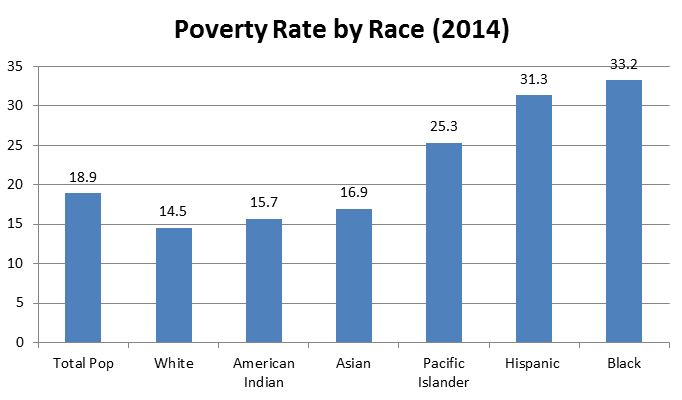 Fewer white Arkansans – roughly 1 in 7 – found themselves in this situation in 2014. This stresses the fact that many folks are suffering from lack of opportunity and low-wage jobs that fail in helping people create a better life for themselves and their families.

Wages in Arkansas aren’t keeping up with the rising cost of goods like gas and food. Because income isn’t meeting rising prices, families can afford less now than they could in 2007.

The poverty rate for all racial groups has remained steadily high over time. But the gap between whites in poverty versus Blacks and Hispanics in poverty is still wide. Arkansas should take immediate action to make it easier for people to build a secure future.

There are several things that law makers can do to help lift families out of poverty and expand economic opportunity to more Arkansans:

Check out AACF’s other Census data blogs explaining the need for a statewide EITC and our state’s status in health coverage.